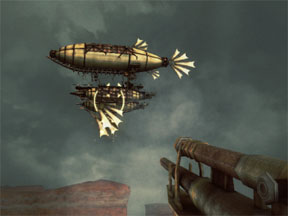 In mythology, Icarus was the Greek who flew too close to the sun, only to have his wings melt and plummet into the sea. It’s meant to be a cautionary tale about overreaching. However, taken quite literally, it could simply be a warning about flying around in untested technology. Lets hope you don’t heed that warning too much, as it’s the core element of the fun for Guns of Icarus Online.

There’s something about finagling a makeshift airship into the sky with not a single life boat on board, miles above land or sea, cast amongst a perfectly trustworthy group of strangers (or friends) facing all kinds of death-defying odds. Hazards include cannon blasts, flame throwers, harpoons, and machine gun fire that simply spells all kinds of crazed fun and excitement for a hopeless soul to get into. Muse Games brings us this new and refreshing perspective to multiplayer matchmaking in the form of guts, wits, and air combat.

Guns of Icarus Online is an expansion of the cleverly original Guns of Icarus game, where, during the campaign, you played a privateer/trader tasked with ferrying precious goods across all kinds of hostile airspace filled with pirates. The first game took place in a vast war-torn land where many communities had been isolated from one another with very little traveling between them. That is, until a brilliant individual by the name of Gabriel rediscovered flight in the form of a zeppelin and cargo ship combination, the Icarus. Now turning attention away from the ‘campaign’ side of things, Muse games brings us a new expansion placing a greater amount of focus on the multiplayer aspect of the original story, and the results are quite amazing.

The online game offers up plenty of instant action via its simple yet user friendly interface, sort of throwing first time players at the controls initially. Little in the way of tips or in-game strategy is given out once aboard ship, so players will have to wander and learn as they go if they desire to find their bearings soon after.

There’s no room for coat-tail riders or strays aboard these vessels. Everyone has a job to do if they’re serious about keeping their flying scrap piles airborne. There are three classes of job to choose from including captain, gunner and engineer. If you’re crew is going to have any success in the skies, then everything will hinge on how well everyone works together given their respective professions.

Captains carry the bulk of the load and are usually in charge of piloting the ship and putting their gunners in the best possible situation during combat. Besides navigation, the captain may also need to call out orders, a.k.a point out problems or situations, requiring immediate attention. It takes some decent wits and guts to take on the sometimes stressful role of Captain. One thing’s for sure, if things go horribly wrong out there, you can best believe the crew will be pointing the finger at you.

Gunners have one primary directive: if it floats, shoot it down! Though the job is pretty cut and dry, there is some substantial skill involved. Besides having a good knowledge of the weapons and how to get the most effective use out of them, gunners have to be pretty mobile most of the time, especially on skeleton crew vessels, moving frantically around the decks of the ship manning the guns at the most strategically precise moments and locations. It’s absolutely critical that gunners and captains be on the same page as things can go south very quickly due to lack of cooperation and teamwork.

Engineers are the unsung heroes of any good airship. Captains and gunners often get a lot of praise in the wake of victory, but everyone sort of forgets about the shifty crewman who kept the weapons from falling to pieces, kept the main engines from going up in flames, and may have even had time enough to scope and target enemy vessels between repairs to make life easier on the rest of the crew. Things can get real hairy when the hull comes under fire, so you need a quick thinking handyman who can quickly assess damage and make timely repairs to help keep things alive in the heat of battle.

The real brilliance behind the game is how all of these elements come together and make for a unique and addictively fun gameplay experience. If you play long enough, you’re bound to come away with some unpredictable yet memorable moments. Painfully awkward moments like accidentally falling off the ship while making repairs, watching a gunner go up in flames with his equipment or listening to a horrible ship captain crumple under the pressure of mass criticism and mutiny from his less-than-loyal crew come to mind for me. And then there are those heroic moments too, like dropping the competition out the skies with extreme prejudice, piloting your vessel with great precision in harsh environmental conditions, or making critical repairs while under fire to help turn the tide of battle in favor of your team. Those make you want to just keep coming back for more. In a nutshell, the game has tremendous replay value.

The graphics and audio are solid as well, showing off large polished, immersive environments with careful attention paid to ship and character models, backed by a nice selection of music and sound effects. What’s more to like is the fact that you won’t necessarily need a high end video card to run the game either, and being able to chat live with friends and teammates via microphone deeply enhances the overall gameplay experience. If you happen to be the captain, its almost a requirement for giving out quick orders. This lead to a nice social experience for me and other players.

The bottom line is Guns of Icarus Online is an absolute blast to play, and offers a new and refreshing game play experience that’s both satisfying and highly addictive. The game looks fantastic and is backed up by a solid audio engine all around. Not to mention the fact that this is a stand-alone expansion not requiring the original game to boot. In short, one would be worthy of walking the plank for passing up the opportunity to play this title. So if you haven’t done so already purchase all this sky-flying adventure for a very reasonable price of $19.99. It’s worth much more than its weight in gold, and earns 4 1/2 GiN Gems from us. Next stop: let’s see how close we can get to the sun!