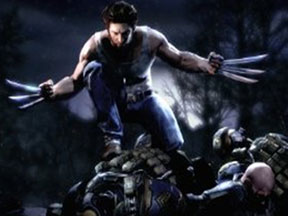 Wolverine is probably one of the most recognizable Marvel characters of all time. This is probably due to his gruff, take no crap personality, and the fact that any character who slices and dices the bad guys with adamantium claws that shoot out of his hands is destined to be a badass hall of famer. However, his depiction in video games has always fallen a bit short of the mark made by his legendary comic book persona. That is, until now.

X-Men Origins: Wolverine released along with the movie, but the game is set before the film and includes voice talents from the movie. The game fills in some of the story that the movie skips. It also bounces back and forth from past to present time and back again. This does make the storyline a tad hard to follow at times.

The game opens with a cut scene where you get to see some of the vicious attacks you will soon be dealing out. The action starts with you skydiving while avoiding rockets and ends with your claws deep in a man’s chest. Africa is your location and you are in the past.

I don’t want to go too into the storyline so as to not spoil the fun you will have with this game.

The overall look of the title is very nice, but there are a few chinks in the armor. At one point, a piece of rock that I smashed decided to take orbit around me. I came to a checkpoint and reloaded my game to solve the problem. There were a few more instances where the graphics became a bit pixilated and glitchy.

The control scheme is very nice and its easy to use to pull off some amazing moves. You are able to target and lunge at an enemy to take them out, which allows this game to move at a fast, action-packed pace. Small puzzle scenarios help slow the action down at times, which I found refreshing.

The health system is more true to Wolverine then others I have seen. Your health regenerates, but don’t allow it to get too low before you jump out of the action so it can rebuild, cause then you will go down and back to your last checkpoint.

I also found the game to be a bit repetitive. There weren’t very many different enemy types, and boss battles became rather stale. I would have liked to see more comic book based bosses or sub bosses. The first boss type enemy is a giant rock creature and a pretty cool first major battle, but the same boss reappears several times throughout the game.

The skills and mutagen system is really nice. Your skill level at defeating a particular type of enemy increases each time you slay that type of enemy, making them easier to beat as the game goes on. This is a passive system that you don’t have to manage but can be monitored from the character menu.

The mutagens are different too, and add to gameplay. You need to search for and collect mutagens. Wolverine begins the game with one open slot to add a mutagen to and as he levels up more are unlocked. Mutagens do different things from boosting health or damage, to increasing experience gained and a lot more. You should equip the ones that best suit your style of play.

There are also other types of pick-ups that will aid you along the way like health orbs that increase your maximum hit points, and dog tags that give great experience bonuses. Each time Wolvie levels up you also receive bonus points that you can distribute among other skills like claw damage or spin duration.

This is one game that even though there are some slight flaws, the fast paced action and every expanding arsenal of combinations and special skills keeps the game fresh and interesting. The game stays true to the Wolverine character I know and love from the comics and as a fan I have to say" THANK YOU!