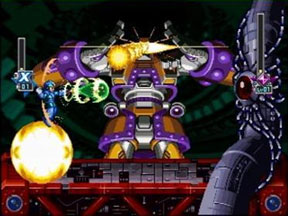 I was once a Mega Man fan, but that was back when I owned an NES. My favorite game in the whole series was Mega Man 3, and in my opinion, the series wasn’t the same ever since. I vaguely remember playing four, and five and six.

The same can be said for the Mega Man X series. Since I originally owned a Genesis and not a Super Nintendo, I was never able to play X, even when it came to the Saturn and PlayStation.

But now that Capcom is starting a trend of compilations, as shown by the excellent Classics Collection, the Mega Man X series is now available as a classic compilation. Featuring the first three X games from the Super Nintendo, and the later three titles on the PlayStation and Saturn, this series takes place years after the original series that I grew up on.

Dr. Wily is a distant memory, and in his place are evil robots called Mavericks, who are led by a new villain, Sigma. X, as Mega Man is now called, fights alongside a group of "Maverick Hunters" along with another semi-playable character, called Zero.

The control is even more advanced than that of the original NES series, as X is also capable of clinging onto walls, and can earn body upgrades such as armor, speed boosters, enhanced blasters, and a helmet capable of destroying walls. But still, the X series follows the Mega Man formula that is known and loved: travel through a stage, beat a boss, and take advantage of his weapons for the following stages.

Emulation of all six games is adequate. When you start playing, you can easily tell that you’re running either a Super Nintendo or a PlayStation One game. But in aspect, it’s not really that bad looking, if you get used to the lower resolution graphics, and not expect a complete overhaul. All of the games do have enhanced soundtracks, but that is about it.

As for extra features, those who expected all the bonuses that were available in Capcom Classics Collection are likely to be disappointed. Aside from the enhanced soundtracks, there is also a huge art gallery, as well as a hidden game: the recently unreleased in the US game Mega Man Battle and Chase, a simple kart racing title that would not have done well here as a separate title.