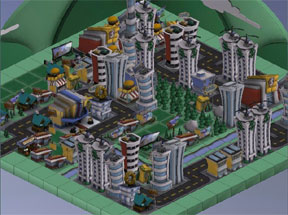 When I got a copy of City Builder to review, at first I thought it was going to be an unofficial version of SimCity designed exclusively to play for the Wii. It would have made sense, and I was curious to se how the controls would have worked. After all I played SimCity on my iPod and the touch controls worked for that, so why not?

But when I loaded it in my initial shock came as it required me to lay down road pieces from a slot machine at the bottom of the screen. The whole Joker’s Wild concept took me by surprise…and I ended up liking it.

City Builder’s concept is simple. Build a road from point A to Point B. To do so, you must pull a slot machine like menu and select from the five pieces that are available. As the road is completely built, buildings will be built based on the level of resources are available.

At first you can only build on the ground level, but as the game progresses, it will be necessary to lay down water pipes and eventually power lines to build higher level buildings. In all, the game feels less like SimCity and more like Pipe Dream.

Now, I never played the original Pipe Dream, but I do recall other versions of it. The most recent was the hacking games in the original BioShock. It is a very easy game to get into and actually quite fun. But in all aspects, it feels like it can be done on any console. The controls use the standard sideways configuration of the Wii Remote, with no waggle commands at all. For some reason, I can see this also becoming a DLC game on either Xbox Live Arcade or the PlayStation Network. And of course, it could also easily be distributed on the PC through a service like Steam, where it would be a natural fit.

That’s not to say it’s a bad game. In fact, it’s quite fun. It’s just the experience feels pretty basic. The visuals are simple and cartoony. Even the houses bounce around like they are alive, as does the music. It’s a catchy cartoonish quality jingle that plays on each section. Quirky but simple.

Like many games on the Wii, City Builder is designed primarily for the younger gamer. However in the end, I found myself actually enjoying the game, as it is simple, catchy, enjoyable, and admittedly a fresh change to all the waggle based games we are used to seeing on the Wii.

As so, I do believe this should be made available for other consoles and the PC as a DLC game.

The Wii version is budget priced at $29.99, which is not a bad deal considering the simplicity of the game. If only more companies would consider the price when they release their games.

PROS: Interesting combination of Pipe Dream and SimCity with a touch of The Joker’s Wild. Very easy game to get into. Value priced.