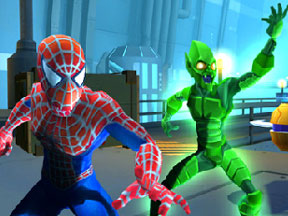 Note that this review was conducted with the Wii version of Spider-man: Friend or Foe.

Well, they finally did it. They finally provided a title where gamers can play as Doc Ock, Venom, Lizard, and Green Goblin, among others, but does it live up to the expectations that we thought it would? I have mixed feelings on this.

First off, I don’t know why this game is rated Teen. Friend or Foe, in my humble opinion, should be rated E for Everyone, since it is basically a kid’s version of Marvel: Ultimate Alliance. To prove this, both games have the same picture of that kid in a blue t-shirt with a green undershirt holding onto the Wii controls on the back of their boxes.

Go ahead, you can look. I’ll wait.

I wasn’t very impressed with the M:UA controls on the Wii (I wasn’t really impressed by the game at all, truth be told, but that’s another story), so it stands to reason that I wouldn’t be overly enthusiastic with the controls for Spider-man: Friend or Foe, either, which would be fine, except for the fact that I am. Since it’s a kid’s game, the controls have been dumbed down and now fit the game perfectly. It’s still not interactive, as all Wii games proclaim, but it is a lot of fun and very easy to get into.

Also, I found that the game had some amazing voice acting and a pretty decent storyline.

In Friend or Foe, Spider-man is summoned by Nick Fury and asked to help fight an alien threat that is taking over the minds of various characters, both hero and enemy. After defeating each boss, the situation is explained to their now freed minds and everyone decides to pitch in and fight against the invasion.

The levels of this game take you to stereotypical versions of Tokyo, Nepal, Cairo, and my personal favorite Transylvania (which has some great cheesy music, by the way).

The two player is pretty standard for an action/adventure type of game, there are plenty of Easter Eggs to be discovered, the computer on the SHEILD Helicarrier is hilarious, and there are some pretty good tongue-in-cheek pokes at the comic world in the cut scenes.

The style of the game, much like the graphics, is very cartoony and animated, but this proves to be eye catching, and works well with the title.

So, what are my gripes?

The same thing that makes Spider-man: Friend or Foe interesting also plays a hand in its downfall. The controls are only enjoyable when playing with Spidey; however, with anyone else you’re reverted to little more than button mashing, which tends to get old.

Also, the levels, though completely beautiful, are very silly with their generalities. I mean, you go to Transylvania and meet up with Blade! Come on! You’re really not playing it subtle, are you Next Level?

So I guess it’s really all in how you approach the game. If you’re hoping to find a serious game that’s filled with complexities in both story and game design, then Friend or Foe is going to be a major let down.

As a kid’s game, however, this new Spider-man title is top notch. The gameplay isn’t that taxing, but it provides enough difficulty to make the experience interesting.

I, personally, am looking at this game and its accomplishments through a fun filter, and therefore recommending that you pick it up with the same expectations.