Call of Duty is one of those series that doesn’t exactly require an explanation, but for the sake of clarity: This is a relatively fast-paced first person shooter franchise that is extremely iterative. At this point in time, Call of Duty as a whole is practically infamous for its annual or biennial release.

Be aware that this review is written from the perspective of someone whose last experience with the Call of Duty franchise was Modern Warfare 2 on the Xbox 360- approximately nine years ago. Also, it goes without saying, but if you hated previous Call of Duty titles, there is very little Black Ops 4 is going to do to bring you into the franchise unless you are a huge proponent of battle royale game modes. With that out of the way, let’s find out if this iteration of Call of Duty is worth playing, shall we? 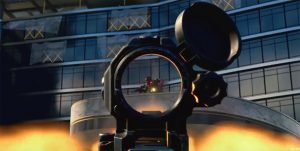 Normally story would be the first thing touched on, and while there are a large number of story snippets that can connect to portray an overall conflict to the players, there is no actual story campaign in this year’s Call of Duty entry. Black Ops 4 has a much higher focus on its multiplayer game modes, though players interested in getting some background information can select one of the eight specialists in Specialists HQ, which functions as a tutorial. It also has videos to watch after playing a multiplayer game versus some bots. It’s…okay. Nothing really to write home about in this regard. For the most part, Black Ops 4 eschews its traditional single player campaign with multiplayer to pick from a large selection of well-known game modes, and wraps them all up in some very familiar FPS mechanics. 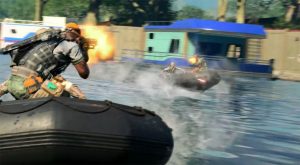 As far as multiplayer goes, you have a wide variety of modes to select from in order to sate your digital bloodlust. There are thirteen different game modes available, which are Team Deathmatch, Free for All, Hardpoint, Domination, Control, Search and Destroy, Kill Confirmed, and Heist. Hardcore lovers will have HC Free for All, HC Team Deathmatch, HC Kill Confirmed, HC Domination, and HC Search and Destroy.

[amazon text=Join the party! Pick up a copy of Call of Duty: Black Ops 4 from Amazon!&asin=B072MKR1RL]

Heist mode, in particular, is loads of fun. Players start off with a set amount of money ($500), and your goal is to be the first to drop a container of cash to an extraction point. Damaging enemy combatants, among other actions, earns you more money that you can spend on more guns or upgrades to help you in the next round. It’s a lot like Counterstrike in this regard and is probably one of the best overall game modes in the entirety of Black Ops 4. 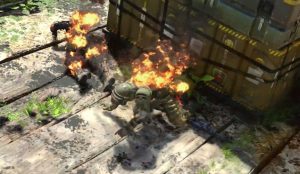 It’s extremely similar to PUBG, in fact, but Black Ops 4 does actually add some things that differentiate it from its competitors a bit, considering players can find Perks littered across the battleground that can add 100 to your current health, increase your movement speed, or even get alerted when an enemy is aiming down their sights at you. Guns handle the same as everything else with Call of Duty’s trappings, and there are even pilotable helicopters in this mode which is equal parts amusing, fun, and saddening when it gets blown up. 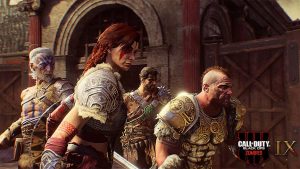 The zombies mode is the last big attraction for a Black Ops game, and 4 is no different in this regard. There are three zombies maps available at this time for the base game, IX (set in a Roman coliseum), Voyage of Despair (set on a sinking ship), and Blood of the Dead, which is a remake of a previous game’s map. For those who bought the Black Ops pass there is also a fourth map called Classified. In this mode, you play on a map and try to survive a horde in random matchmaking or with friends, and there’s a bit of humorous dialogue sprinkled across the mode from the colorful cast of playable characters. Working with your teammates, you’ll activate traps, find Easter eggs, and blow away zombies until you finally lose to the horde (which has a variety of different enemy types), or the fact that the game is incredibly prone to freezing and crashing during this mode.

There are some new mechanics all-around in Black Ops 4, however: Such as how health no longer regenerates and players have access to a syringe that instantly starts your health regeneration. This actually seems like a great change- the syringe, itself, is on a cooldown of six to seven seconds, and the animation to use it takes about a second as well (the healing itself takes longer as it is still gradual). You can still fire your weapon while healing, which means that knowing when to heal will be extremely important, as dashing around cover and waiting several seconds for health to regenerate no longer occurs. Overall, this appears to be a very welcome change to put more control in player’s hands.

There are some weird bugs and glitches in the PS4 version, however, though only one of them was really bothersome: Sometimes the zombies mode just crashes. As it stands, even with a good team, reaching beyond round 30 seems a nigh impossibility because the game would crash for seemingly any reason it could after an hour or two of play. 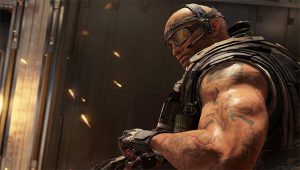 Messing with an Easter egg on Voyage of Despair pretty consistently froze the game, sometimes opening the menu would crash the game… there’s seemingly any number of reasons that your run in zombies could be brought to a screeching halt at no fault of the player, which is extremely weird and completely unrewarding. Outside of zombies mode, though, the freezes are fairly rare but selecting specific options from menus, like inspect profile, and then selecting other options can completely freeze the PS4 to the point you need to unplug it. These kinds of things shouldn’t happen on consoles. 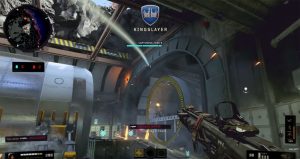 So, Call of Duty Black Ops 4. This entry is entirely focused on multiplayer, and you level up, unlock guns, perks, scorestreaks, and more, and you keep rootin’, tootin’, and shootin’ your way to prestige and then do it all over again. Is it substantially different from previous entries? I can’t answer that. The gunplay was familiar to someone who hadn’t touched an entry of the series in something to the tune of nine years, and while there have been some adjustments throughout the last near-decade, the game was still familiar enough that even someone who had fallen out with the series was able to resettle fairly quickly. The game is fun, though, with Heist and the zombies mode being pretty incredible experiences overall, as well as extremely addicting. The game also has splitscreen functionality, so you can sit on the couch and play zombies mode or even Blackout with a friend on your couch – something that was done numerous times in preparation for this review.

Overall, Call of Duty Black Ops 4 is a very competent shooter that knows what it’s doing. The way the guns handle is solid, and the introduction of specialists is… all right. They essentially serve as loadouts with bonus abilities you can activate and not much more (going into it, I was expecting something akin to Battlefield class designations and was a bit let down in that regard). The zombies mode is a fantastic way to sink dozens of hours, and the reasonable number of multiplayer modes should make it so that you don’t miss the single player campaign much at all. If Treyarch could fix the damnable crashing that’s inherent to the Black Ops series hallmark mode, zombies, this game would be a solid 4 GiN Gems out of 5, but with the issues as they currently stand, it is immensely frustrating to spend two to three hours reaching round level 35 only for the game to freeze and you be treated with a lovely blue screen telling you an error has occurred (and mind that this would happen one or two times per *day*).

This very well could be the Call of Duty entry that can bring back in a bunch of those who fell off the CoD wagon years ago once the game is patched – for right now, though? Wait a little bit until the patches sort out the crashing issues.