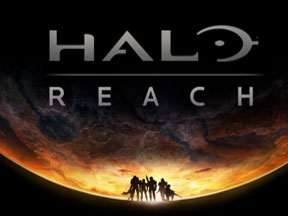 What a week and a half it has been! Being a Spartan has never been more exciting!

If you’re one of the fortunate ones who happened to already be in possession of a copy of Halo: ODST or one of those irrationally impulsive gamers such as myself who prematurely traded in their copy of ODST before the beta, but was just lucky enough to find a used copy of the game at the local Gamestop before they sold old out, then you know where I’m coming from: The Halo: Reach Beta is an absolute blast to play.

For starters the game looks fantastic. The character models have been completely re-done, a lot more fleshed out and detailed than ever before and on top of that they can be customized to fit your specific tastes and style of play. The environments, though I’m basing this off of only the few maps that come with the beta, are well constructed for multiplayer matches. Every map seems sizably large and well-routed so that there is a good balance of air assault, guerilla warfare, surprise attacks, and sniping going on.

The weapons have been over-hauled a lot. The classic Elite "Needler" weapon has been beasted out with fully-automatic homing rounds which can easily break down your opponents shields in a matter of seconds if you know what you’re doing, and the covenant assault rifle packs arguably a little more punch and seemingly faster rounds in the new version to name a few.

But, of course, a beta would not be a beta unless there wasn’t something new and shiny with lots of fire power to shoot at and destroy your opposition with. Fresh off the assembly line we have the covenant "DMR" or Designated Marksman Rifle, good for medium to long range attacks sporting semi-automatic capabilities and a long range scope for those hard to reach enemies. The "M319 Grenade Launcher" which can fire and bounce around frag grenades into to well populated enemy flanks can cause lots of destruction, and for toppers can remotely detonate the grenades it fires turning them into deadly land mines wherever they come to rest should the user hold down the trigger button and release it at just the right time. Nasty piece of work.

On the Elite side the new "Needler Rifle" is the long range version of its little cousin packing a lot of fire power and accuracy from over a long distance. The "Plasma Repeater" which is sort of the answer for the covenant assault rifle, fires a barrage of pulse shots at the enemy depleting armor and health in a few seconds when placed in the right hands. One of the hottest new weapons to talk about, however, is the "Focus Rifle" which can fire a powerful laser beam from long range with tremendous accuracy. Packing a serious wallop, this weapon is nasty at nearly any distance making it one of the most respected weapons of the new arsenal.

But, seriously what’s really new about this years Halo besides a few weapons and maps? I mean that’s typical for most FPS shooters, right? To some it all up in one word: Gameplay. That’s right all you arrogant, high-strung vets out there who think you hold the world of Halo in the palm of your hand. The game has changed significantly. New strategies and situations come into play now and one thing’s for certain: No battle is a given with this game.

This year you can choose a "loadout" or class of armor specs before you go into battle, and between respawns, the first of which is "Airborne." This loadout includes "jet packs." That’s right I said jet packs. Players can fly significant distances across the map with limited bursts from their jetpack. The pack continually recharges when not in use and with careful strategy and patience you can quickly be on your way again. Just be mindful that your altitude isn’t too high after you’ve rained terror from the skies and run out of juice in mid-air, else you won’t live to tell about it.

You can also choose the "Scout" loadout which gives the user the ability to sprint across the map in limited bursts and make up just as much distance on the ground as the jetpack in the air. Scout is great for the aggressive run and gun player who likes to sporadically cause chaos all across the map during a match.

Then there’s the "Stalker" loadout, quickly becoming a fan favorite, which allows players to transparently cloak in with the environment and go silent making it easy to slip up and take out enemies from behind. Without a trained eye, a Stalker class player can wreak havoc on the opposing team. What’s pretty cool about this loadout is that should you decide to pick up new weapons while cloaked they become cloaked the instant you pick them up so that you cover isn’t blown.

Finally, the "Guardian" loadout which is arguably the hottest feature in the game allows players to perform an "armor lock" maneuver in which the player takes a knee in a 3-point stance and instantly generates an invincible forcefield around the silhouette of their body. Players can take a blast from anything while in this stance and come up out of it without a scratch. Of course, the forcefield like the jetpack, the cloak, and sprint feature has a limited time so players need to use some strategy between recharging.

So much to talk about including customizing your Spartan to your own tastes from helmet and armor upgrades to color schematics and personal insignias. But don’t take my word for it. For those who have missed out on the fun thus far, the Beta goes public from May 14th to May19th so here’s your chance to see what you’ve been missing. There a lot of cool arenas to play in including "Slayer," "Grab Bag," and a cool "Invasion" mode where Spartan players try to keep Elite players from stealing a big bomb from their base of operations. Halo fan or not, you owe it to yourself not to miss out on the next few days and download the beta. More to come in the future. See you on the battlefield!