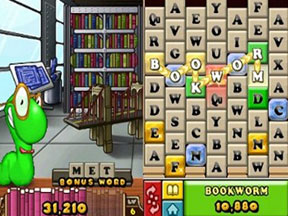 Welcome to the world’s most superfluous game review.

I say that primarily because I’m summarizing for prospective consumers a game experience that you can sample firsthand, for free, from Pop Cap’s website, and secondarily because I love any chance to use the word "superfluous" in a sentence for an audience. No, really, I just got a happy little shiver from that. This is how I know that I am precisely this game’s target audience.

For the sake of form (and the four people that would rather read a review than go play a game), here’s a summary of the basic or "classic" game play. You have a board made of columns of letter tiles, with the columns alternating elevation by a half-step so that each non-edge tile is adjacent to a total of six other tiles. Using the stylus, you create words by tracing a path through contiguous tiles which are then removed from the board and replaced by the tiles above a la "Bejeweled."

Spelling longer words (up to twelve letters long) can cause the game to designate some tiles as bonus tiles that then give you more points if you can use them in a word. Spelling lots of 3-letter words (the minimum length) can cause the game to drop a "burning" tile into the top of your board, though fire tiles also seem to get dropped in occasionally at the random caprice of the game.

A burning tile will destroy one tile beneath it each turn until you use it in a word. The game ends if a burning tile reaches the bottom and still cannot be used. You can opt to "shuffle" the board at any time if you find yourself running out of options, re-randomizing all non-bonus and non-burning tiles, though doing so creates more burning tiles at the top of the board. In the "action" variant of play, burning tiles manifest and descend at a set rate rather than waiting for you to take a turn each time.

True to Pop Cap’s usual style, Book Worm is a nice little brain game that’s been gussied up with a few inoffensive bells and whistles to set it apart from starker DS puzzle game offerings like Picross and CrossworDS. The core game is simple to learn, smart, and addictively fun. It’s the bells and whistles that vary a little bit in their quality, but they never so much hinder the game as fail to especially enhance it.

The dictionary of legal words is wonderful and vast. The slang terms included tend to sound a bit British, with "Fag" (helpfully defined by Lex, the Book Worm who eats all the words you find, as "a cigarette") "Gob" ("your mouth"), and "Nan" ("a person’s grandmother") among the words available. My inner first-grader was pleased to find that anatomy words had not been censored ("gamete," "zit," "loo," "groin," "bra," "sex," "poop," "fart," and even the big V-word are all legal), and my outer college graduate was gratified by the inclusion of words like "hexane" that have not once been useful since my organic chemistry final.

Substance-related words that were notably suppressed in the anagrams portion of CrossworDS are legal in Book Worm. Words like "beer," "Smith," "gin," "cigar," and "heroin" are all perfectly palatable to Lex. The game even includes some English-adopted words, but there it gets a little sketchy. For example, the word "frau" is legal, but not "rio." Some Latin words are legal, like "qua" and "quod" (and thank goodness for that or a burning "Qu" tile would be outright murder.)

My only real disappointment with the dictionary is Lex. Sometimes when you feed him a word, he’ll tell you the definition, but not for every word. Since the game tracks the word you’re spelling and lets you know when you’ve hit on something legal, it’s possible to discover words that aren’t already in your vocabulary. That Lex thinks I need words like "Rut" and "Pun" defined, but offers nothing but a smile when I brute-force the words "zek," "dobla," "goan," "lino," "feu," "lum," "skite," "vig," "skua," or "acini" was disappointing.

Anyone inclined to enjoy this game will likely be someone who enjoys learning new words, and the game’s failure to support that more fully seems to lose out on a lot of worth. But if you recognize any of these words and are considering writing to me to tell me what they mean, you should probably stop reading and go buy the game right now.

As is touted on the box, the game includes lots of different goals you can achieve. As you find words and your score goes up, you gain levels, and each level rewards you with a new title, from "Encyclopedia Salesman" through "Editor" to "Glossographer" to "Ultra Bookworm" and beyond, though the DS version lacks the artwork accompanying these that you find in the online version. You also incrementally decorate rooms in your "Library," and have the option to try and complete twenty "books" by spelling certain words around themes like "vegetables" and "kitchen."

Unfortunately, for the most part, your obsessive completism must be its own reward. It’s a little bit of a letdown to me that, after creating all 240 words like "Armoire," "Nephew," and "Ladybug" that there is no acknowledgement or reward in the game whatsoever. Maybe Pop Cap has irrecoverably spoiled me for their future offerings with the goodies at the end of "Plants vs. Zombies." Just a spray of animated confetti would have been better than nothing.

Game play doesn’t change much as you go up in level, either, except for an increase in the number of burning tiles that appear if you shuffle the board. The game offers one bonus word at a time which, if spelled, gives extra points and is replaced by a different word. There is also a "word of the day" which, despite my spelling it several times over and logging more than 24 hours of play over the course of several days, never changed from the word "blip." Similarly, there’s an impressive-looking words-per-day tracking function that can supposedly track your book-worming by day, month, and year and show it to you in a colorful bar graph, but this function also seems unable to recognize the passage of time, rendering it useless.

Another small disappointment is the two-player mode. You can challenge anyone else with a DS to a two-player competitive version of the game without their needing to own a copy of the game, but the game play is completely non-customizable. You always play to the same number of points, and turn length is always fifteen seconds.

The DS interface, by and large, is excellent. It is easy to swap back and forth between the game screen and the various stat and word-list pages to check your progress. My personal favorite aspect of its functionality is that the game auto-saves pretty much every turn, so if you need to abandon the game suddenly for any reason, you don’t lose any progress.

This becomes important when you realize that getting through forty levels of word-finding can take upwards of six hours, and playing that all in one sitting is a sure formula for eye strain. One improvement over the online version is that a found word is not removed from the board until you accept it with an additional tap, giving you the chance to double-check yourself before committing. That second tap occasionally seems to have a hair-trigger, and the stylus tracking can be a little clunky, but I only found this problematic in the "action" version of play. The core of the game works very well in the hand-held format.

The art for the game is nicely whimsical and colorful, though the animation is pretty lackluster. The bonus tiles have a nice gleam to them and motion on the game board is fluid, but the animation of Lex off to the side is barely worthy of the name.

Similarly, the sound effects for selecting tiles and whatnot are fine, but the background music is maddeningly repetitive and awful, and the few sound bites of Lex talking are straight out of the late eighties in terms of speech technology. Best use of the mute function I’ve had since getting a DS.

Overall the game’s little extras give the impression of having tried to do too many things and run out of available memory before it could do any of them well. I consistently find myself wishing that they had focused on making one or two of the extras really thorough, interesting, variable, or special instead of doing so many things half way.

So, in summation, if you are someone who likes words and word games and finds them to be their own reward, Book Worm is a pleasant and highly playable diversion with a nice mix of word-power, strategy, and action incorporated into play, and the transition to the hand-held platform is clean and functional. If you’re only so-so about word games in general, it is unlikely that the added features and graphics will redeem this one for you. They all come off as a bit…well…superfluous.