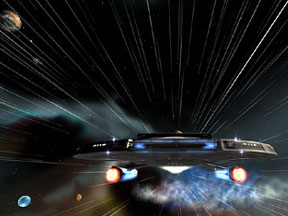 Ok, my editor can finally stop yelling at me to finish this review. I know it’s pretty late. But I could not bring myself to admit that a Star Trek title could be bad. I kept hope alive that a patch would come out and save me. No such luck.

You see, there are some elements of Star Trek Legacy that are truly amazing, groundbreaking even. But there are also a few flaws that will, and probably should, prevent anyone form picking this one up and getting disappointed.

Legacy takes place over the entire history of Star Trek from Captain Archer and the first Enterprise all the way through both generations of the main show, Deep Space Nine and Voyager. You will get to fly all the ships that you have come to know, from the original Enterprise to the Defiant.

And if we were grading on looks alone, this one would blow almost everything else out of the water. This is some of the best Star Trek modeling ever seen on the computer screen. In fact, a lot of it looks as good as or better than the television series (any of them).

Throw in the voices of the various captains and all the actual Star Trek sounds, and you have a graphics and sound combo that is second to none.

So, why in the world is Legacy getting a below average score? Because it’s almost unplayable. The calendar on my wall looks great too, with all the various ships from the Star Trek world. But you would have about as much fun playing with the pictures as you would trying to tackle Legacy.

Basically, it means that sometimes small things going wrong will kill big projects. And Star Trek Legacy’s nail is the control scheme. There are just a few minor commands missing from the layout that are vitally needed to successfully play the game.

You will basically be in charge of multiple ships on each mission. Given the number of enemies you face, you will need a fleet most of the time. But giving orders to your fleet requires either that you visit each ship and give them orders, like an admiral physically transporting back and forth, or try to give group commands to your entire armada.

In a lot of missions, group commands won’t work because you don’t want your entire fleet doing the same thing. Early on for example, you have to protect some medical ships as they cure diseases in a solar system. You don’t control the medical ships at all, so of course they spit up in all directions with big "attack me" signs plastered on the rear nacelles. So you have to split up your fleet. But guess what? There is no escort command!

You can’t simply tell your Federation Battleship to "guard this other ship" which in any other game would cause it to follow along, attacking anything that tries to do the escorted vessel harm. But here you have to constantly visit all the ships in your fleet, leapfrogging them along what you think is the different paths the medical ships will take and hoping the AI is smart enough to engage bad guys that pop up. If you try to give a group command, the likely result is that everyone will leave their escorts and jump to the action, which leaves everything else a sitting duck.

In another early mission Captain Archer commands you to defend a space station, saying that nothing should get through the line. But without an escort command, you can’t really build the line, meaning a lot of bad guys are going to probably be able to sneak through on you.

The ships control pretty much like slow moving fighters when you are commanding individual ones. You have to move around and get an enemy ship into the arc where you can fire your phasers. Then once you drop their shields, you finish them off with photon torpedoes. Here there are problems as well. You are supposed to be able to hit one key to target the closest vessel. But the targeting computer must have a virus because this lock is almost always wrong. Instead of targeting a ship that is right beside you and a little off to port, it will target one that is out of range but farther ahead.

To add insult to injury, on the PC version of the game, THERE IS NO WAY TO CHANGE THE KEY CONFIGURATON. You are stuck with pressing the "F" key to initiate a scan for example. And you have to use the A,W,D, S method of steering your ships, even though, hello, we have arrow keys. I have not played a game in the past ten years that forced you to use a hard wired control scheme, and a bad one at that. I should fail them just on that fact alone. It’s simply lazy programming not to include this simple necessity for PC gaming. Can you imagine if Oblivion forced you to hit the "F" key to swing your sword? I have seen a user group that says you can edit configuration files using Notepad and change the keys around, but come on, this should be right there in the control menu. If some geeks on a user group can figure out how to do it, you would think that the game’s programmers might be able to work it out.

At least with the 360 version of the game the controls are a little more natural, though the targeting problems are still present, and in fact, seem a little bit worse.

In the end, Legacy is a beautiful-looking game, but that fact will only serve to frustrate you as you dream of what could have been if things were just a bit easier to control. Another month in development and this one might have been one for the ages. I even waited for and downloaded the latest patch to give the game one last try, but as far as I can tell, the patch did not seem to do much of anything, and it certainly did not add player defined keys.

Legacy will likely go down in history like an odd numbered Star Trek movie. Fans will know what I mean by that, but for those of you who aren’t, well, the even numbered movies don’t suck.