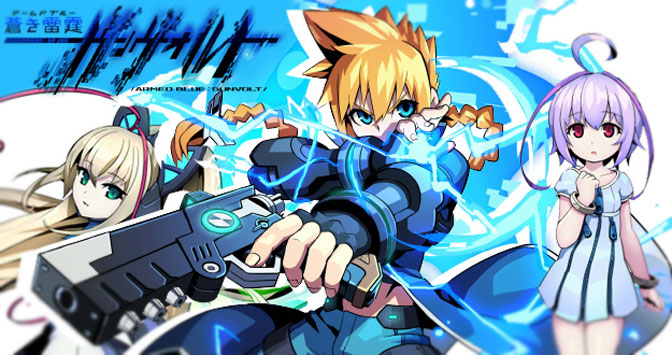 Do you like Mega Man? Do you like electricity? I mean, it’s just common sense to like both! Azure Striker Gunvolt, despite seemingly named by placing random words from a dictionary on a dartboard, is actually quite an electrifying little game, especially when coupled with an additional title called Mighty Gunvolt.

The setting of Azure Striker Gunvolt is an interesting one…a Muse, essentially a super-famous pop idol, has enraptured the world using her voice and is somehow controlling the populace. The titular hero gets himself captured to discover where this Muse is to eliminate her. The twist is that, upon finding her, Gunvolt discovers she’s actually being used by an evil mega corporation and didn’t want to do any of that from the start, so he instead rescues her and parts ways with the resistance group that gave quirky dialogue along the prologue level.

Honestly, Azure Striker Gunvolt is the action-platformer that the 3DS needed at this point in time. Extremely similar to Mega Man Zero and ZX, Azure Striker Gunvolt makes a lot of attempts to combine fast, frenetic gameplay with tricky enemy placement and stage design, forcing the player to get better and clear stages quickly and efficiently in order to score the most in bonuses. For a shooter-platformer, Gunvolt’s pistol barely damages enemies at all- fret not, however, as his gun isn’t his main weapon since his true strength lies in his electric powers, several of which would make a particular yellow rodent jealous.

The initial power Gunvolt has is an electrical Flashfield the player can surround himself with, blocking projectiles and dealing minor damage to enemies who come in contact with it. The actual power of this field, however, is not revealed until you use Gunvolt’s pistol to, “Tag” enemies with it and then activate his lightning field: Large, homing lightning bolts with then begin ripping tagged foes’ health meters to shreds, the amount of this damage dependent upon how many times an enemy had been tagged (more bullets to tag the enemy equals higher damage. Very simple formula, no quadratic equations here). This electric Flashfield can be used to take down foes, allow the player to hover in the air to increase jump distance, illuminate dark corridors or even activate switches and elevators to allow further progression. Using these attacks, players will select the stages they want to play (a la Mega Man) and take down bosses in the order of their choosing, and even get new guns as a reward for having done so… very familiar to another blue-garbed character’s video games.

To make Gunvolt’s electric powers not so OP, he has an EP meter that quickly depletes upon over use. Recharging either requires time or that the player holds still and taps a button, both methods of recharge forming their own kind of challenge when the screen is littered with bullets and enemies. Successfully venturing through Azure Striker Gunvolt will be a simple task at first, with players romping their way through stages and defeating enemies as they come across them, but later levels and bonus challenges will test and try player skill and patience, requiring that gamers master the flow of seamlessly tagging and electrocuting foes while also timing precise hovering jumps by wisely using the same meter.

There are quite a number of resources that players may tap into to make their journey easier, however, as there is equipment that gives Gunvolt the ability to perform multiple jumps, additional health, etc., are all able to be found in game, as well as different guns with varying fire patterns to more adequately tackle difficult stages. Some guns may just contribute more tags incredibly quickly (one found after defeating six bosses gave up to 8 tags- that’s a lot of damage!), while others may fire at angles or offer charge shots that pierce through multiple foes, tagging them multiple times, and more.

Also, there’s a very simplistic leveling system in the game, so sometimes going and grinding a level may help those struggling to complete a specific stage as you gain more health or access to new skills. Graphically speaking, Azure Striker Gunvolt is great to look at, bordering on the level of pure eye candy for those who appreciate a good sprite-based game. The level of care taken by Inticreates as they animated the environments and characters is nothing short of amazing, and it’s never difficult to tell what’s going on despite players dashing, tagging enemies and floating from one location to another with big, splashy electric attacks going all the while. The music is also quite substantial and extraordinarily fitting, never distracting nor does it ruin the mood. There are fewer memorable tracks in the game, but some, such as Adept, do stand out from among the crowd.

The only really disheartening thing, design wise, in Azure Striker Gunvolt is that there aren’t really that many different types of enemies- it is no exaggeration to say you’ll destroy five or six different enemy types repeatedly throughout a playthrough, but their placement in the stages usually present new challenges. Value-wise, Azure Striker Gunvolt has a fair amount to offer. The game itself is really only four to five hours long, though there’s a significant amount of additional activities players can also partake in, from obtaining the true ending to various challenge missions that will test your Gunvolt skills more than the individual stages could ever dream of subjecting casual players. Even better,

Azure Striker Gunvolt isn’t just one game, but for a limited time, two: The Mighty Gunvolt, a Game Boy Color-inspired romp that plays extremely close to the retro, traditional Mega Man platforming exhibited in Capcom’s throwback 9 and 10 games (sans the ability to choose the order of stage completion).

In Mighty Gunvolt, players are given the ability to play as three separate characters- Ekoro, an angel who can hover above the ground as well as control enemies for a short period of time, Gunvolt, who has a double jump, and Beck of Mighty No. 9 fame who can perform a forward charge that opens new areas like Mega Man’s classic slide. A fair amount of enemies have been remixed (retro-fitted, if you will) for this GBC-style demake, with different stages and bosses. Mighty Gunvolt plays very similar to the classic Mega Man series while the full Azure Striker Gunvolt title would be a lot more like the Mega Man Zero games. As a free game, Mighty Gunvolt is quite the entertaining venture, though it only lasts maybe a couple of hours total, to finish with all three characters. To summarize:

Azure Striker Gunvolt is a solid action-platformer title that, while being a little on the short side, makes up for it with a fair amount of content after beating the game in the form of a challenge mode and different ending. The Mighty Gunvolt as a free companion title certainly doesn’t hurt in terms of bang for your buck, either. There’s plenty of hearty action to keep gaming veterans engaged and while it may border on the difficult side for those unfamiliar with 2D action titles such as Contra, there’s quite the rewarding title underneath should you find the right selection of skills to assist you in completing the journey. For $15, this is easily one of the best action/platforming titles on the eShop, and players who enjoyed Shovel Knight will most likely enjoy this too.