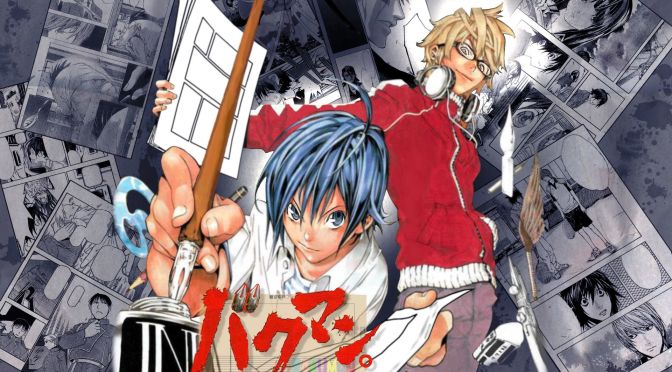 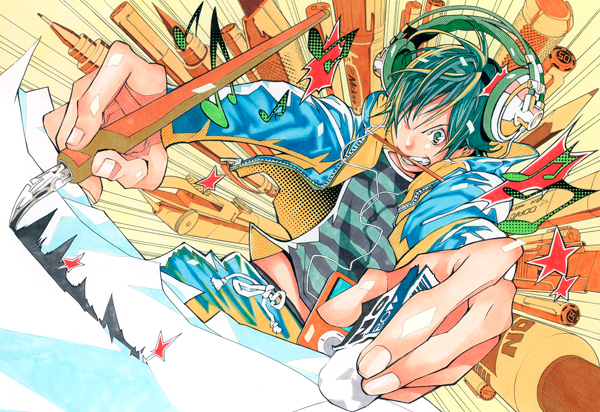 This week for Manga Monday I’m covering a series that is fairly intersting, it’s all about how Manga is created from the team who made the hit series Death Note. It’s Bakuman by Tsugumi Ohba.

Plot Synopsis:The plot begins when Moritaka Mashiro, a junior high student, forgets his notebook in class. His classmate, Akito Takagi, notes Mashiro’s drawings in it and asks him to become a manga artist to his stories.

Plot: This series has already been completed and I enjoyed the ending, that said what comes before is the perfect example of how hard a life mangaka, a manga author/artist, leads. They are often overworked and have to compete fiercely to be successful. This series is amazing and while it doesn’t have the comedy like Gekkan Shoujo Nozaki-Kun it’s still a great series.

Characters: I really enjoy all the characters, they even have the now chief editor for Shonen Jump be a character in the series. Too many spoilers to talk about all of them, but the lead pair is pretty cool.

Art: Well Bakuman is from the team that brought you Death Note, so expect amazing artwork. Not to mention this series is just as much about artwork as it as about stories.

Overall: If you’ve ever wanted to become an artist of any kind, or a comic book writer in particular, you need to read this series.

For those who like: Drama, What goes into making art, Great Plot, Amazing Characters, Excellent artwork.

Not for those who don’t like: Any of the above, but can you really hate all of that together?