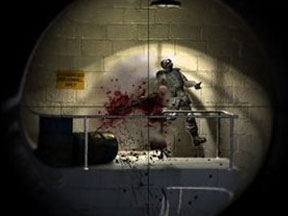 The paranormal has fascinated man for as long as it has terrified him. Everything from ghosts to demons has cropped up in the imaginations of various cultures. Russians have the Baba Yaga. Romania has the myth of Dracula. Even the Japanese have myths about the paranormal, as seen in horror films like The Grudge.

But whether you believe in these tales of the paranormal or not, one thing that we can all agree on is that there is nothing more terrifying than a bad video game. Prepare to be scared.

F.E.A.R. Files features two separate games in one: Extraction Point and Perseus Mandate. For those of you who did not play the first game (like me), then you’re up the creek without a paddle when it comes to understanding the story. Because the game tells the player nothing about the story, the game essentially boils down to you, a super soldier, killing a lot of clones in big, black armor, with the occasional ghost or robot here and there. At least the game, while technically an expansion pack, does not require the original to play, a good trend in the industry these days.

In addition to unoriginal enemies, the game also features fairly generic weapons. The majority of the weapons consist of the basic pistol (which can be duel-wielded), the standard assault rifle, and the standard shotgun.

The weapons all have decent sound, but nothing spectacular. One perk that the game does have though is the ability to carry three weapons at a time, four if you are duel-wielding pistols.

With basic weapons and enemies, F.E.A.R. Files does not do much to wow the crowd. But, as with all survival horror games, level design is critical.

Unfortunately, in its attempt to be scary, F.E.A.R. Files is just downright annoying. Players are given a flashlight to illuminate dark areas of levels. This is done to give the player a fear of what may be lurking in the dark. Unfortunately for fans of horror, the answer is a resounding nothing! More often than not, the only thing the dark areas do is make your entire television go black, with absolutely nothing to show for it.

The design of the levels is not the only problem though. The colors in F.E.A.R. can be summed up in one word: bland. Nearly every level consists of gray, brown, and black, with an unnecessary splattering of red on the walls for blood, which in itself is another problem: there is far too much of it. Yes, blood is scary, especially in the context of horror. But there is so much blood in F.E.A.R. Files that it looses its realism and becomes just another part of the level.

The gameplay does not do anything to help the game either. Most of the gameplay consists of shooting a soldier, waiting for the next to pop around the corner, shooting him, and so on and so forth. Once players find the shotgun, this process becomes even more trivial as one blast from the shotgun is enough to destroy any basic enemy. There is no reprieve from the uninspired gameplay online either. The online play is the standard Team Death Match, Capture the Flag, etc.

There is plenty of bad to go around in F.E.A.R. Files, but there are a few bright spots. One of those bright spots is the ability to slow down time. This gives players a clear edge over their enemies. The only problem with this is the fact that for most enemies, slowing down time is irrelevant. They are so easy to take down that there is no need for it. Also, slowing down time not only slows your enemies down, but you as well.

Overall, fans of the original may find this game to their liking, but this is not the place for new players to jump in. It does very little in the way of trying to be original, and is more or less attempting to capitalize on the original. F.E.A.R. Files.

So it gets 2 GiN Gems out of 5 for being an unoriginal, bland game.