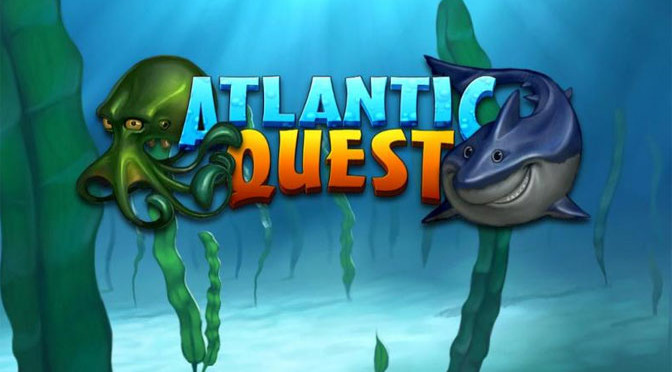 The first thing players will notice is that Marlin from Finding Nemo gives you a, “Hey, what’s up?” and explains the basis of the story to you: BP oil is at it again, and you’re the last hope before they drill too deep on the ocean floor and release the dark lord Cthulhu. Okay, that’s not exactly the plot since it would have been heavily evoking South Park while the target audience for Atlantic Quest is obviously much younger than that of the envelope-pushing adult cartoon. The actual story is that an oil spill occurred and you, as the final hope, must help the sea creatures eliminate the petroleum in their waters by matching seashells, urchins and starfish. The logistics on how bringing four starfish together eliminates three sections of oil is never actually explained in the game, but I’m holding out for a plot twist regarding that in a later sequel.

With the plot out of the way, it’s time to talk about how Atlantic Quest plays: It’s a match 3 game like Bejeweled, Candy Crush or any one of a hundred different variations. It’s a very, very crowded genre but the bottom-line determination is that if the game is entertaining or unique then it may potentially be worth a try and Atlantic Quest, at least, decides to attempt the former confidently.

For those who have somehow missed out on the match 3 genre for the last decade and a half, the basic goal of Atlantic Quest is to use a stylus on the lower screen to match at least three tiles together by swapping them with the ones directly next to, or above, them. Matching four or more tiles together at once gives you more points as well as potential bonus tiles that have different effects, such as bombs that destroy large areas of tiles for massive score gain. The most interesting concept in Atlantic Quest, however, is that you don’t only swap tiles to win, but you can also switch the tile-match mode to allow you to chain tiles by dragging your stylus over them or destroy a large, connected clump of tiles at once instantly as if you were playing Collapse.

The element of being able to change how you match the tiles together does add a certain level of strategy to the game, since if you find yourself stuck in a position where there is nothing you can match on the screen by just swapping a tile, you may discover a large number of disorganized panels that you can break at once using the Group match mode over Swap or Chain. Another welcome addition to garner additional score as well as keep disinclined players from getting stuck is that early on in the game special, single-use power ups are available and mapped to the ABXY buttons. The power ups you can call at your whim can do things such as destroy a specific panel for you or shuffle tiles around the screen to make new matches possible, but they aren’t unlimited- players can obtain more by making colored bubble tiles that encapsulate the helper to the bottom edges of the playing field to free them, after which you can force them to do your bidding.

Players complete the levels by matching a certain number of specific tiles in order to rescue fish while making matches over certain off-colored oil panels to clean up the ocean for the aquatic life. The need to destroy specific panels in the play field should remind players of another type of tile-matching game by the name of Candy Crush Saga, so if having specific objectives to go with your Bejeweled-style gameplay is a must then Atlantic Quest may just be the way for you to quit begging your Facebook friends for additional lives. Completing a stage requires you do all of each aforementioned task, the information for both being provided on the top screen of the 3DS. Of course, this does mean that the 3D effect of the console is only utilized to make an actionless HUD gain a small amount of depth but considering that the practical whole of the game takes place on the bottom screen that’s to be expected.

As far as length is concerned, there is actually quite a bit of heft behind this downloadable title: There are twelve groupings of ten levels, giving you 120 levels to play through, total. The last level of each of the groupings is a puzzle piece swapping minigame, however, so that’s more like 110 of what you bought the game for and ten extras on which your mileage may vary. Each level of the game has its own unique shape, some being significantly easier to complete than others, and each of the groupings offer its own backdrop to the levels as you play through them. The music is extremely fitting, if in part simplistic, but it sticks to the playful, underwater theme without deterring from it for a moment. The actual tiles themselves are rendered as 2D sprites on the lower screen rather than more defined polygons, but this isn’t to say that the tiles don’t look fine. While Atlantic Quest won’t surprise anyone with its blockbuster visuals, the graphical representations of the tiles and backdrops aren’t pixelated or unpleasant to look at in any way. Some more animations on the tiles themselves when the player is making combos would have been nice, but then again, some may never miss such a thing.

Overall, there’s nothing wrong with Atlantic Quest in the slightest. It’s a competently made tile matching game but that is an exceedingly dense genre at the moment with a population count higher than the aquatic bacteria that grows on half of the panels players match in Atlantic Quest. The game plays quite well, has a large amount of levels to work your way through on your trek to the finish and while it could have used some more visual polish when it came to the aesthetics- there’s nothing that would keep someone from recommending this title to someone who would want to play a matching game as the inclusion of all of those power ups, as well as objectives, aid in making the play of the game much more pleasant. However, it would be very difficult to sell this game to someone who isn’t already hankering a great deal for this type of title.

All in all, those wishing for a solid matching game on the 3DS that’s not Pokemon Battle Trozei may find a lot of gameplay at a small cost in Atlantic Quest.