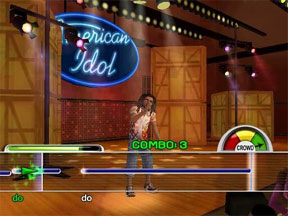 If you ever thought you could be on American Idol, but don’t want to fight it out with 10,000 other hopefuls in your city, then the new American Idol game may be just what you are looking for.

Konami’s Karaoke Revolution: American Idol lets you become an American Idol contestant. After you audition, you may earn an invitation to Hollywood and perform in front of the crowd on center stage. The standard list of 40 songs includes a good mix of rock, country, and R&B. And best of all (or worst of all depending on how you did) after each performance you will receive verbal feedback from the judges.

I believe this is the 6th Karaoke Revolution title from Konami. I am only really familiar with one other version. We played the country version at a friend’s house, and when we purchased a PS3 this past year, one of my Christmas presents to my wife was a copy of CMT Presents Karaoke Revolution: Country with the USB microphone.

This was a surprise hit with my whole family, who are not at all into video games. Though, I guess I should not have been surprised. Everyone has seen and quite probably performed Karaoke at some point, and with the added bonus of being in the privacy of your own home, why not give it a try? Besides, this game makes it so easy to pick up the microphone and go. Note: I did not say anything about singing quality here. While my wife, brother-in-laws, and some of the kids might be very good, the same thing can not always be said for the rest of us.

Whether you have played an earlier version of the game or sung karaoke before, the basics are still there. And you will be playing in a snap. You sing along as the words and relative pitch scroll across the screen, left to right. Whether or not you warble, hum, or sing, the key to success is to stay on pitch, at least most of the time. If a song is out of your register, you can sign an octave above or below the song without penalty. This feature means that even if you don’t sound great, as long as you stay on key you can be successful.

The game and the scoring may be a little bit strange if you have never played before, but there is a short, simple tutorial to guide you through the learning process and more importantly to explain the scoring system.

There are some different modes of play. The easiest is just basically doing karaoke without any kind of scoring. This is really great if you want to get to know a song, or just feel like singing. The next stage is to do one song and get a score and judging. The score ranges from zero to 50,000 with 12,500 needed for gold; 20,000 for platinum. When you are ready, you can try the American Idol competition which you can set to eight, 13, or a full 18 rounds just like in the TV show.

During the American Idol competition you start out doing the short versions of songs. This is during the audition stage of the game. When you get to the semi final and subsequent rounds you will sing the full song. Once you sing a song it is locked out of the options list until the end of the competition. That way you can’t be a one trick wonder, though on easy level this is possible.

Songs are given a challenge rating of one, two, or three notes, and if you score really well during a song by earning a platinum or diamond rating, you will unlock some special features. There are some fun extras and bonuses that AI fans will enjoy-characters you can unlock such as "Liberty Boy" and "The Wasp" and videos of show auditions and performances.

During the songs, you will get an audience rating just like earlier KR titles, but you will also be judged at the end of each round. Computer-rendered Simon Cowell and Randy Jackson are on hand to offer commentary on your performance, but for some reason Paula Abdul is a no-show. She is replaced by a Paula look-alike, "Laura." (Whoever that is.) Paula fans (if you’re out there), take heart, she isn’t completely left out of the game-she appears in many of the bonus videos and you can also unlock and sing the late 80s classic "Straight Up."

You can get an idea of what the judges are thinking during the song when you see Simon either yawning or standing up and clapping. The judges can be pretty brutal/funny (read: "you should be banned from singing") and sometimes helpful-"you started off really strong and finished horribly," or "last time you sang this same song, you did a much better job." In my opinion the judging was one of those things that could have destroyed this game, but Randy and Simon really added a lot when they provided a robust and appropriate variety of comments to this game.

Like all the games in the KR series the graphics are nothing to be wowed about, but they serve their function and let you know how well you are doing in the game. For the most part, the creation of your character is nothing new with the standard assortment of hair, head, body, clothing and accessories. That is, unless you have the EYETOY camera, which allows you to import your own face into the game.

Overall this is a fun little game. If you only have a little time to play you can sing just one song; if you want to spend an evening, you can go though a competition or get a few friends together and see who’s the best singer. Fans of American Idol and Konami’s Karaoke Revolution series alike should enjoy this title.

The song list for American Idol includes: All My Life, Alone, (There’s) Always Something There To Remind Me, Be Without You, Breakaway, Build Me Up Buttercup, Can’t Help Falling In Love, Crazy Little Thing Called Love, Dilemma, Do I Make You Proud?, Don’t Let The Sun Go Down on Me, Don’t You Want Me, Easy, Every Rose Has Its Thorn, Flying Without Wings, Heartbreaker, Heaven, Hungry Like The Wolf, If You Don’t Know Me By Now, It’s Not Unusual, Just The Way You Are, Let’s Stay Together, Love Will Keep Us Together, More Than Words, Photograph, Piano Man, Proud Mary, Rock With You, Saving All My Love For You, She Bangs, Stand By Me, Stickwitu, Straight Up, Sugar, We’re Going Down, The Real Thing, Total Eclipse Of The Heart, Unwritten, What A Girl Wants, You And Me, and You’ve Lost That Lovin’ Feeling.

For getting everyone around a console to play a game together, there is not much better. At a recent party, it was the surprise hit of evening. Like the show itself, the game will appeal to all demographics from children to teens to your grandparents. Everyone can sing at some level, and American Idol gives everyone a change to shine, or to crash and burn gloriously. And everyone is probably better than William Hung, who’s famous She Bangs clip is unlockable as you play the game. American Idol earns 4.5 GiN Gems for creating a game that stays solidly in tune with the gamer populace.