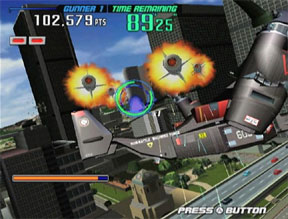 Sega is without a doubt the masters of arcade based shooters. While arcades might have reached extinction here in the US, the trickle of shooters they still make (such as Rambo) are still as engaging as ever.

This has not been more apparent as it was in the late 90s. With titles such as Virtua Cop and House of the Dead, Sega led the charge. But it was another game that took the arcade shooter to a whole new level. That game was Gunblade NY.

Running on Sega’s Model 2 arcade system, Gunblade’s weapon was not a handheld pistol, but rather a large mounted machinegun turret, simulating the feel of being a gunner on a helicopter. It was heavy to wield, but it felt authentic. I even dared to go John Woo by using both machine guns while playing, and after I was done, my arms were crying out in pain, but it was worth the experience.

A few years later, there was a sequel, L.A. Machineguns. While the core of the gameplay felt identical to Gunblade, it featured the powerful (for the time) Model 3 board and included a chain system that rated your shooting accuracy by how fast the androids were destroyed. It also added, for worse in my opinion, innocent civilians that result in penalties when being shot. Another part I didn’t care for in the sequel is the Score Attack Remix mode, a timed shooting gallery that was in Gunblade, was removed. Still, it was an enjoyable shooter, and well worth my Dave and Busters credits back in the day.

Now, continuing the tradition of shooters such as Ghost Squad and both games are available on a single disc combo pack for the Wii.

But sad to say the games really haven’t aged that well. It makes sense though. Consider that both of these games were designed primarily for arcade play and not for extended play on a home console. But in the total gameplay (which equates to about one hour) those who enjoy a good shooter might get some enjoyment out of it.

Since both games are shooters, all that is needed to play is the Wiimote used in a point and click fashion. We’ve seen it done both well (as in House of the Dead Overkill) and terrible (Attack of the Movies 3-D.) Thankfully it leans more towards the Overkill side, as it is very responsive and most of your shots tend to register.

The Wiimote’s speaker also functions to give audio feedback from your commanders, but it is quite difficult to make out at times. Still, playing with the Wiimote, even with a Zapper attachment, doesn’t feel the same as those heavy mounted turrets the arcade game is well known for.

Also, since these are old arcade games, the visuals also didn’t age well, especially Gunblade, since it ran on the Model 2 board. But what gets me is there was some slowdown apparent in L.A. Machineguns, which ran on the successor Model 3. The closest console hardware to that board was the Dreamcast, and I always thought the Wii was more powerful. Somehow it doesn’t feel like it here.

Some attempts at replay were added, such as a progressive ranking system. As ranks are increased, special weapons can be selected for rapid fire or more firepower. Still, it doesn’t add too much to the game, and it feels like its old arcade self.

Even more, despite a $30 price tag, I can’t really recommend the purchase of this arcade pack, and it feels more like a solid rental title. Maybe if the price goes down to $20 or even $10, then maybe I’d consider it. But for now, consider this a one shot at shooter nostalgia, and nothing more. You’ll play it for an hour, and then move on to something else.

Cons: The Wiimote, while accurate, doesn’t have the heavy feel of the arcade’s gun turrets. $30 is a bit too much for two games whose total gameplay equates one hour. Some slowdown in LA Machineguns.