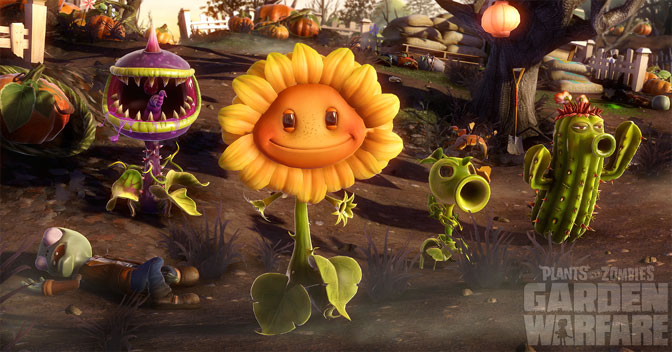 Unless you’ve been living under a rock for the past few years, you know that zombies are the “it” thing right now. From The Walking Dead in graphic novels and on television to the ever-popular Left for Dead series, all things undead are in vogue. Even Minecraft’s enemies are primarily of the zombie variety.

Regardless of what form they manifest themselves in, there seems to be no end to our imagination in how to dispose of these denizens from the grave. Should we shoot them? How about a hatchet? Explosives work nicely too. Then in 2009, PopCap Games came up with the most unconventional method of zombie eradication yet: plants.

Five years later, not only have zombie-vanquishing plants caught on, they’ve rooted (pun intended) themselves in the videogame world’s consciousness. Unlike past iterations of the franchise that were strategy-based, however, Plants vs. Zombies: Garden Warfare is a third-person shooter. And just like its series brethren, Garden Warfare throws convention out the window with outstanding results.

Before I go any further, there’s something important to note about Garden Warfare: It’s online only. There is absolutely no offline component to it, and it requires an Xbox Live Gold membership to play, though there is now a PC version if you want to catch it on that platform.

With no offline component, the game thrusts players into one of a handful of game modes. There’s a basic, four-player co-op mode, a la Mass Effect 3 or Gears of War’s Horde mode, that has players defending their garden from 10 waves of zombies.

There’s also a team deathmatch (called team vanquish – “death” is ironically a frowned-upon word in this game) and a mode called “Gardens and Graveyards.” In both of these modes, players alternate matches playing as plants and zombies. In Gardens and Graveyards, the plant team needs to defend their gardens while the zombie side attempts to occupy them.

If the timer runs out and the base is still standing, it’s game over for the zombies. If, however, the zombies can accumulate enough time in the garden, the plants fall back to the next base. This process goes on until the plants hold out long enough or all seven bases are captured.

In newly added, free DLC, there’s also a mode that requires teams to locate, plant and defend a garden gnome with a bomb strapped to its back, with the team that takes out three of its opponent’s bases victorious.

Garden Warfare’s game modes only provide the framework for the game’s true genius, though. With multiple classes, Garden Warfare focuses on teamwork and cooperation as much as it does simple shooting mechanics.

As an example, the sunflower is a healing class that can revive fallen comrades faster than other classes. They can also heal other players and potted plants, which can be set up as turrets to defend key positions on each battlefield. That said, sunflowers don’t have quite the same firepower as the peashooter, which is the standard soldier class. In order to be effective, each team needs a variety of classes coordinating their actions.

There’s also a melee-based chomper, which can take out single enemies at close range, and a cactus that functions as the game’s sniper role.

On the other side, the zombies have a similar setup, but because of their task as the aggressors, they feature a more attack-minded design. The scientist plays the role of healer for the zombies, but since they’re effectively an endless horde, its abilities are more focused on pushing the team forward than holding ground. Teleporting and leaving sticky grenades around the battlefield create massive headaches for the opposition when used correctly.

The engineer plays a different type of support role from the scientist. In addition to directly supporting the attack, engineers can construct teleporters in set locations, getting zombies closer to the base after respawning. They can also call in drones that attack enemies from on high.

After each match, the game awards coins that players can then use to purchase card packs. These packs feature everything from support items that can be used in-game, such as potted plants or extra zombies, to new characters and weapons.

Additionally, some of the cards that come in each pack give you the chance to customize your characters’ appearances. I was unabashedly excited to find that I’d unlocked a pair of sunglasses with multicolored peace signs on the eyes for my sunflower. That kind of absurdity perfectly highlights what Garden Warfare is all about: simple, silly fun.

This isn’t a game for the ultracompetitive, die-hard shooter fans. This isn’t a game where you obsess over your kill-to-death ratio. This is a game that you play because it’s fun, it’s wacky, and above all else, it’s always giving you something more to discover.

Garden Warfare’s graphics further accentuate the game’s whimsical charm, with a vivacious color scheme and appropriately cartoon-esque levels to match. The customization options border on – and often cross – the line of ridiculousness, but in a good way. They keep the game’s tone light, and generally speaking, the more warped your sense of humor, the more you’ll get a kick out of the various unlocks.

The audio department keeps the fun theme going too. While the zombies make your standard grunting noises, some of the plants make noises that are downright hilarious. Even the sounds of the weapons fit perfectly. Instead of bangs and booms, most of the guns make pinging and plopping sounds.

Plants vs. Zombies: Garden Warfare strikes the perfect tone of crazy action and charming design. Even though it’s online-only, the mechanics work well and encourage team-oriented gameplay. At its best, the game is a superb third-person shooter. At its worst, you’re being chased by a telephone pole-wielding gargantuan zombie firing bolts of electricity at you, which, quite frankly, is so amusing that it’s almost not worth getting upset about.