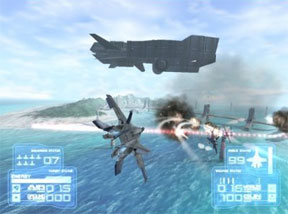 I paid no attention to Rebel Raiders when it first came out for the PS2 and the PC, so my bias toward the game is relatively fresh and unaffected. Flight sims of the past aside, picking up the controls for RR at first had me thinking "This could be cool," but after a few hours into the title, the handling had me wanting additional options that never manifested.

Obviously, there are good and bad aspects to this game. For instance, the idea of this being a great Wii port gets ground in the dust rather quickly, as no real utilization of the Wii’s unique control potential exists outside of using the nunchuck’s balance feature to guide your aircraft.

The wand is merely used for its buttons. "A" slows down your plane, the trigger gives you a thrust in speed, and the D-pad allows you to reload your infinite ammo.

For my console, I use a cordless sensor for my Wii, and after selecting which window I wanted from the Wii Home screen, I turned the sensor off and was not hindered in the slightest during gameplay.

As an upside for this title, small as it might have been, using the nunchuck for the plane’s movements was actually pretty cool, even if the handling wasn’t all that advanced.

As far as the gameplay itself is concerned, you get much of the same experience with the game as you do with the controls. The first couple of levels are interesting enough, as you chase down enemy aircraft and missile them out of the sky, but after several repetitions of these missions, you start wondering if there’s a future for you and RR, or if it’s always going to be like this.

It’s here that you start considering the pros and cons of dumping your new Wii title at your nearest game shop for credit toward a different, more promising choice.

Still, the indication of 32 different levels and 20 different models of aircraft keep you hoping for the best. So you keep shooting down the enemy, which in this case is a totalitarian force that you and your fellow pilots have sworn to destroy in order to bring peace and blah, blah, blah, because, really, no one is listening.

As you go head to head against your enemies, seeker missiles that trail your plane until their thrusters kick in challenge your skills, and you’re forced to throw them off with a barrel roll, which is a lot easier than it sounds.

Other enemies take the shape of bombers that never really let off any bombs and carriers that threaten EMPs, which never seem to fry the massive carriers themselves once the EMPs are triggered. There are also land-based guns that can’t be targeted with your missiles and fall under machinegun fire with some difficulty.

The problem with using your machine gun is that there is no control over it since the sights are fixed and aimed directly ahead of you. This means that when you’re going up against a land-based machine gun or the flanks of a bomber that’s shooting you with strange, green orbs, you’re coming at this target head-on, which gives it a pretty good shot at you, as well.During every encounter with the majority of these targets, your shield goes down bit by bit. In many cases, this loss is unavoidable.

Another interesting aside to this game is that while enemy fire eats away at your shields with ease, smashing fully into a mountainside, enemy vessel, or even the vast ocean results in virtually no damage to your plane, and you basically skip off it like a stone and pick up your speed once you’re back to open air. The technology of the future amazes me sometimes.

One of the largest faults of this game, however, comes with its lack of save and check points. While I understand that saving during a dogfight would be somewhat difficult in a real combat situation, it’s also a bummer to fight your way through 20 minutes of gameplay only to die and have to tackle an entire level again from the very beginning. To make matters worse, the game over screen that comes up after you die has an encouraging message ready for you: "Try harder next time."

Yeah. Thanks for that.

All in all, this game has several weak points, but a lot of these weak points also come across as fun flukes of gaming. As a budget game, RR comes very close to hitting its mark, but as a real game, this title runs out of gas quickly.