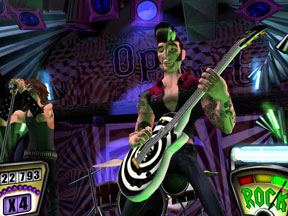 When Guitar Hero came out last holiday season, no one knew that it would eventually pass Konami’s lineup for the best music based game available. Konami’s mistake of not importing Guitar Freaks over to the US from Japan gave RedOctane and Harmonix the perfect opportunity to unleash Guitar Hero to an unsuspecting crowd, and the rest was history. Guitar Hero went on to win many awards, including our award for Best Peripherial (although in my opinion it should have also won PlayStation2 game of the year.)

In an ironic twist of fate, it seems that Konami is now planning on releasing Guitar Revolution, but is it too late?

It might be, because now that RedOctane has released Guitar Hero II, Konami might just want to stick with the DDR series that they know well. Rather than overhaul the original game that wowed the critics and fans alike, RedOctane only made it better. To start off, the multiplayer has three tracks that can be played: lead, rhythm, or bass guitar. Of course, the original multiplayer mode is still around via Face-Off and Pro Face-Off.

The addition of the new multiplayer mode really sets this game apart from all the others out there. Think of it like this, instead of playing head to head against someone, you can now actually play like you were in a band. One of you can play lead and the other can play bass.

When playing together, the mistakes of either person can upset the crowd, just like in real life. You even have to cooperate to unleash your star power, with both of you holding up your guitars at the same time to activate the mode where your on screen icons prove that they are true rock gods.

This is also a smart move on Red Octane’s part, because it justifies people buying a second guitar. The link on the right where you can buy Guitar Hero II from Amazon is for the single player game without the guitar, but if you do a quick search you can buy the full pack and get a new guitar as well. If you plan on hosting a party its really the ultimate party game, or if you have a few friends over it can be like getting the band back together. Still, if you own the original, then there is no real need to buy a new guitar for single play, so you have the option to just purchase the game and use your old axe.

Fifty-five brand new songs are available to challenge fans of the original game as well as newcomers. Songs start off with simple tracks such as Shout at the Devil (Motley Crue) and work their way up to the staple of many a rock concert heckler: the nine minute plus Free Bird.

Yes, this time they REALLY want you to play it, and are not just heckling you!

For those who haven’t played the original game, the concept is very easy. The guitar controller has five buttons on the fret, as well as a strummer bar. Notes zoom towards the bottom of the screen, and to play a note, you simply hold down the right colored fret button and strum the guitar when it hits the bottom. It’s very simple to learn but once you get to the hard songs, it takes a long time to become perfect. Still, it is a very simple game to get into. And you will feel like a rock star in no time as the crowd reacts to your every move.

In my opinion it might be a bit too easy. Compared to the first game, I had absolutely no trouble getting 5 star ratings on all the songs in Medium difficulty. Some of which I was able to get a perfect combo on the first try. However, take it up to Hard difficulty level and it becomes a different story.

Again, a majority of the songs are performed by cover bands (hence the well known "as made famous by" moniker.) But where the last game had near perfect covers, there are a few covers that don’t sound like the real deal. Heart Shaped Box (Nirvana) stands out easily as one of them. But this time, both Primus and Jane’s Addiction have joined the staff and have offered their actual performances of John the Fisherman and Stop, respectively.

Of course the bonus tracks have the obligatory Harmonix staple from Freezepop, Less Talk More Rokk, but whoever decided to have the Trogdor theme from the Homestar Runner cartoons should be praised. Add more brownie points for actually having Strong Bad sing it. Talk about the surprise of the year!

Many of the club backgrounds have also been spruced up quite a bit. There are a lot more moving parts in the background this time around, and they are keyed with the music. So when you are doing that awesome bass solo, expect some flashing lights and special effects to accompany you, assuming you are in the groove and the crowd is going wild. Some of the effects are even a bit ridiculous, like having dirt bikes jump the stage over your band during one of the outdoor concerts. I think that would make me a bit nervous in real life, but it really adds to the excitement of what surely must be the best concert the virtual audience members have ever attended.

Anyone who loved the first game is easily going to fit in with the sequel, a perfect example of what to do to a game that wasn’t broke to begin with. Talk is already spreading about the third release and its soundtrack listing. Two of the songs that are rumored are Don’t Fear the Reaper (which had BETTER feature a cowbell player) and Hotel California (which I hope never sees the light of day.) Guitar Hero II will also be released soon for the Xbox 360, but the best way to release it is to feature all the songs from both games, or maybe throw a few more surprises into the mix.

In short, Guitar Hero II proves that this series is not only the most rockin’ in the game industry, but also one of the coolest games around. It earns 5 GiN Gems and we would be very surprised if it were not a front runner for one or several Game of the Year Awards. Rock on!