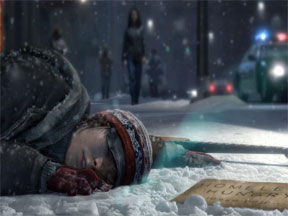 Beyond: Two Souls is a game that doesn’t quite know what it wants to be. As to be expected of Quantic Dreams, the team behind Heavy Rain, Beyond pushes the boundaries of gaming. David Cage succeeds in directing a cinematic experience that places character and narrative above gameplay. Unfortunately, Cage’s writing eventually lets the whole game down, piling on the cliches in the final act of the story.

Two Souls Better than One

Beyond tells the story of Jodie, played by Ellen Page, a girl with a connection to a spirit called Aiden (nonsensically mispronounced ‘I-den’). The game follows Jodie from a young girl of around five, through to a teenager and finally a young woman. Throughout the game, you also get to control Aiden, who can perform a number of poltergeist-style tricks. As Aiden, you’re free to float through floors and walls to investigate the area, distract people and even possess them.

Jodie provides vocal prompts such as "help me, Aiden" to tell the player when to switch into the entity, using the triangle button. However, the game decides when you can switch, but offers no rationale for the limitation. Sometimes you can possess a foe, so that they kill their allies and then turn the gun on themselves. But when it comes to end of mission bosses, possession is often not an option. Other times when Jodie when using Aiden seems like a logical step, he’s just not there, leaving you to solve a problem the old fashioned, non-paranormal way.

Playing as Jodie, Quantic has shied away from the pure Quick Time Events (QTE) that it was criticized for in previous games. Instead of straight button prompts, objects with a white dot next to them require a nudge of the right analogue stick. Flick up to pick up a doll or down to sit on the floor. The right stick is also used for combat. The action is slowed down and you are required to move the stick in the direction her body is moving to complete the action, whether that’s a kick, punch or ducking something. When it works, it’s great, but all too often you’re given a couple of seconds to decipher which way she’s moving and end up getting it wrong, but aren’t sure how.

There is no death in Beyond, so failure doesn’t end in a game over screen. I found this refreshing, but many gamers may feel this removes any sense of peril and therefore, tension. Interviews with Cage reveal that he’s aiming for’a real life experience. There’s no restart in real life. So if you fail to hit the right button at the right time, rather than dying, Jodie just stumbles or gets through a fight with less finesse, leading to a different outcome.

In one scene, this attempt at verisimilitude has Jodie preparing for a date at home. You can tidy the apartment, flick through a recipe book and chop ingredients for a meal, as well as choose an outfit. During these quiet, intimate scenes, the controls work well and I found myself engrossed in the minutiae, agonizing over whether I was overdressed or not. Your decisions aren’t heavily signposted and I like that subtlety,’but it does leave you unsure how big an impact they actually have on the overall story.

When it comes to the acting, Ellen Page really carries the game and Quantic’s technical prowess allows us to see her nuanced performance. Page often uses long pauses and subtle expressions to tell the story, and thanks to the incredible graphics and motion capture, we see it all. The most heartfelt moments feature Jodie as a child trying to understand why she can’t be like normal kids. She struggles to make friends and her parents finally struggle to cope with Jodie’s supernatural abilities.

Willem Defoe plays Nathan Dawkins, the scientist who studies her powers and becomes her father figure for the rest of the game. He delivers as good a performance as he can, given the ludicrous character arc. Once again, it’s Jodie’s childhood that delivers some touching scenes between Page and Defoe, alongside the lab assistant, played by Kadeem Hardison.

The game chooses a non-linear narrative, which I really liked.’Beginning with the scene familiar to us from the trailer, we find Jodie, shaved head,’being interviewed by’police’and she’seems to have no memory. It’s from this’point that the story leaps from one episode to another, slowly piecing her life together and leading to the prologue.’The flashbacks are’where the story is at its most powerful, aided by wonderful performances and spectacular graphics, which render every tear rolling down Jodie’s cheeks.’We see her as a little girl, afraid of’the real, spectral monsters which plague her at night. And then she’s’trying to play with the neighborhood kids, but Aiden’s powers isolate her and frighten her peers. Then the game jumps to tests in the lab and her growing relationship with Dawkins, as well as’the complications brought on by puberty and teenage yearning for freedom and a need to be "normal."

My favorite episode sees Jodie homeless and suicidal. She falls in with a group of hobos as the story reaches its peak. At one point, you busk (street performance) on snowy city streets, which is’a particularly poignant moment. Even here though, the homeless people are all so good, it almost feels like a Christmas special, what with the snow and the pregnant girl and Jodie’s almost angelic presence in their lives. Despite the slightly sentimental tone, I feel like this was where the game really got going’and I was hooked. I wanted to see where it was going next and couldn’t put the controller down. But then the story started to run away from itself.

In another chapter called Navajo, we’re in the desert and meet the cliche mystical native Americans. This episode has next to nothing to do with the main story and makes Jodie begin to feel like the Littlest Hobo, not to mention the hackneyed Indian burial ground plotline.’Beyond’regularly plunders Hollywood with elements of Carrie and Sixth Sense, by way of Poltergeist and a Steven Segal film or two. Whilst there’s nothing wrong with this per se, the result is a disjointed, jumbled mess of a story that leaps from one genre to another.

Cage has stated that the mix of genres is deliberate because life has more than one tone. I understand his intention, but he just doesn’t have the writing skill to pull it off. The author David Mitchell is one of the few writers that can manage this awesome feat, as illustrated in his novel Cloud Atlas, which goes from 18th century diary to action thriller, through to far future adventure. Mitchell is one of the greatest writers of his generation, whilst Cage needs to play to his strengths and hand the writing over to someone else.

Not Another Plot Twist

The game really begins to unravel when it turns to more traditional "gamey" elements. In the last third of the game, we’re suddenly on a mission in war torn Africa, as part of the vaguely silly Jodie as CIA agent plot. This mission takes place after the enjoyable date scene and couldn’t be more starkly contrasted to the more successful elements of Beyond.

Once in Africa, Jodie in on some stealth by numbers mission to kill an unknown rebel leader and frankly this is where the game becomes boring. I’d rather be in Jodie’s flat slicing beef and peppers than creeping around trying to kill random gunmen. The military section also only serves to highlight the limitations of Beyond’s not-QTE gameplay and the lack of freedom we’re given when it comes to using Aiden. Not content with the bland military mission, Beyond then takes what was an engaging story about a girl trying to find her place in the world and throws every gaming cliche in the book at it.

The final missions are an endless slog, as Jodie is thrust from a personal drama to a dash to’save the world, in a generic mish-mash of mad scientist and evil government agency, combined with dark power from the spirit world. Even Willem Dafoe can’t make this tripe’fly. By the final act, I just wanted it’to be over. It felt as if Quantic lost faith in its original intention and decided to throw in some safe,’gaming tropes to satisfy anyone who might have been unnerved by the minimalist gameplay and focus on narrative. The result is a ludicrous character arc that just tears up the emotional story that’s been so carefully developed.

If the game had stuck to its guns and used the episodic missions to tell Jodie’s story and the stories of the people she meets, it could have been much more satisfying. Beyond: Two Souls looks great and pushes the PS3 to its limit, the cast is superb and the tone of Jodie’s early years are compelling, but it’s all ruined by some supernatural hokum and bland military espionage, which’just breaks the spell and reminds you that it’s just a game.