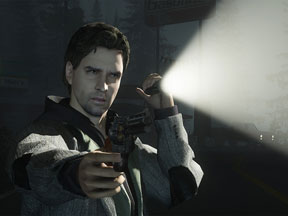 When Remedy released Max Payne back in 2001, it had been in the works since 1998,
and not many critics, myself included, ever thought the game would ever come out. And
even more so, we also believed the game wouldn’t live up to all the hype that it
generated. However the game turned out to be quite good, featuring a strong noir-like
atmosphere, superior narrative (despite some clichÃ© overkill,) and some exciting gunplay,
despite being a bit too much on the linear side.

A sequel to Max Payne came out the fall
after it was announced, and again was linear, but good.

While the upcoming Max Payne 3
is now under a new development studio, and is constantly being pushed back (dÃ©jÃ vu
perhaps,) original developer Remedy went to work on a project that was announced back
at the Xbox 360’s launch, five years ago. That project, Alan Wake, has finally seen as
development head Sam Lake calls "the light of day." But after playing the game, that
light maybe should have stayed off.

Alan Wake was probably one of the most anticipated
titles for the 360, looking like a cross between the Silent Hill and Resident Evil type of
gameplay, and some of the more action oriented titles. And everyone knows how
beautiful the trailers and screenshots looked.

The story is actually intriguing, centering
around horror writer Alan Wake, who is suffering from a severe case of writer’s block
and decides to go away to the small town of Bright Falls with his wife, Alice. They stay at
a cabin located near Cauldron Lake, but have an altercation over Alan using the cabin to
get back to writing. Sound like the start to a good Steven King novel yet?

Because of
Alice’s fear of the dark, Alan goes to restore the power to the cabin when the lights go
out, and then finds her missing when he returns. Of course he decides to go looking for
her.

In his investigation, he finds out then that a dark presence has taken over Bright Falls
and its townspeople. Alan also finds pages from a manuscript that he doesn’t recall
writing, but foretells of events that are to come.

The story takes place over several
episodes. Like an episode of a good television series such as True Blood, each episode
begins with footage of what happened in the previous one, then provides a cutscene
narrative unfolding all the events for the upcoming action stages. That’s pretty cool. But
from here, everything goes downhill.

While the action stages constantly feature an inner
monologue that provides some insight on Wake’s story and his inner trauma, the
gameplay enters the point of tedium. It consists of going from Point A to Point B.

In fact,
it always follows the same pattern. It’s always move a little bit, encounter some of the
Taken (those that were possessed by the dark presence,) shine a flashlight or other similar
item like a flare to bring them into the open, then shoot them with a firearm, move to the
next spot and pick up manuscripts or coffee thermoses.

Eventually the tiresome gameplay for each episode (which can last over an hour or so)
got to me after the third episode. Rather than looking forward to what the storyline would
bring next, I was literally falling asleep. And this coming from a game whose lead
character is named Wake?

I will give Remedy credit for one thing, Alan Wake looks
amazing. Just like Max Payne back in 2001, the visuals in Wake’s 2010 environment are
breathtaking. Characters are very realistic looking, but what really wowed me are the
light effects, especially when using flares.

Usually a combination of lighting and smoke
effects this thick would bog a system down, but not this time. They are stunning.

I can say
the same thing about the voice work. Everything, right down to Wake’s narrative, is top
notch.

But still, it would not be enough to save me from the boring gameplay. I know
there are those out there who will enjoy this title, and are looking forward to the
upcoming DLC, but as far as I’m concerned, Alan Wake will serve best as a cure for my
insomnia. It’s a perfect example of how eye candy alone does not make stellar game.

PROS: Narrative is excellent. It does feel like it comes from a Stephen King novel. Some
of the best lighting and flare effects I have seen in a game. Great voice acting.

CONS:
Style over substance. General gameplay is tedious, ended up a cure for my insomnia.