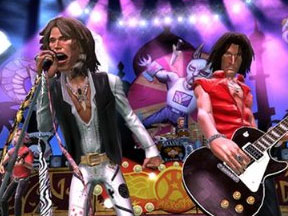 I found myself hard pressed for inspiration when writing the review for Guitar Hero: AeroSmith, mainly because I could sum up the entire experience with the following sentence: AeroSmith fans rejoice, haters pass.

After that, if you’re familiar with the Guitar Hero III experience, there’s really not much more to say.

The graphics are still average. The gameplay is still rockin’. The world continues to spin, for now.

Aside from being a thinly veiled money making scheme, GH:A also serves to promote one of the most widely recognized bands to emerge in the past 30 years, and for that I’ll give my nod and an appropriate "Good Job."

But what about those gamers/music fans that tend to vomit a little when the very mention of AeroSmith comes up in casual conversation? Will this game be worth the FULL PRICE of your average game? Does it bring anything new to the table that wasn’t already seen in last year’s release?

If you find yourself cocking your head to the side and saying, "Yeah, what about all that?" then passing on GH:A is probably your best option, and here’s why.

With the sets compiled to resemble that of an AeroSmith concert, you’ll play through two opening act songs before the main event of three AeroSmith songs. These concerts follow a chronological path through the title band’s history, from humble beginnings to superstar venues.

Of the opening acts, you couldn’t hope to have a better choice of songs (save for my personal condemnation of The New York Doll’s "Personality Crisis." Sorry, just not my favorite.)

The best of these tracks is, undisputedly, The Clash performing "Complete Control," but as much as I may enjoy this track and a few others on the list, they’re hardly enough to keep me interested in a game that is half-filled with songs I’ve never listened to before, though I will say that the songs that we’ve all come to know and love – "Dream On," "Rag Doll," "Love in an Elevator," etc. – and even a few I wasn’t readily familiar with – "Make It" and "No Surprize" – were fantastic to rock through and did well to preserve the good name of the Guitar Hero brand.

As far as game extras, you can expect the same format featuring different characters to unlock, such as Run from Run DMC and Joe Perry, along with some repeats from GH3. There are also 10 songs to unlock, including "Pink" and a few Joe Perry tracks.

And once again, that brings me to the bite in the butt. Unless you’re a lover of AeroSmith or a casual fan looking to get more involved with the band (and the Joe Perry side project), the idea that a handful of songs is going to sell you is pretty far fetched, especially when that sell is set so high.

Had the game come out at $30, I could see giving it a go, but otherwise, you’re fooling yourself.

So, I’ll go ahead and repeat myself: AeroSmith fans rejoice, haters pass.