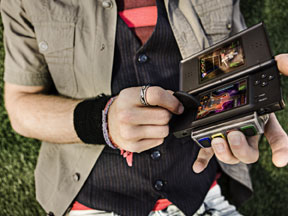 I have to admit that the first time I saw this game advertised I scoffed. I really thought it was just to grab the fans who will buy anything Guitar Hero. I mean, have you seen those keychains?!? Or even the cell phone version. And as for this installment there’s only so much Twisted Sister one can take. Anyway, I wasn’t sure if there would be any seriousness to the game either in playability or quality for being on a handheld.

I was actually surprised.

To be blatantly honest, I have never really played Guitar Hero before this game! Yes, you heard me right. The reason is because I have been playing guitar for the last ten years and I could never replace my axe with a controller. No offense, but if you play you would understand.

Before you power up the game you need to make sure that the fret board is securely placed into the GBA port under the DS. Make sure it’s secure or it will loosen while you are playing the game. Keep the strap snug on your hand. Do not pull the strap too tight or you will loose dexterity in your fingers while playing. Also watch how hard you grip the DS because you can actually eject the cartridge with your palm being pressed against it.

The game starts out by inviting you to put on some headphones to really experience the game’s sound. It helps to wear them. It feels more like you’re virtually interacting with an MP3 player if you do. It feels like if an iPod were to have a guitar simulator on the screen. Pretty cool effect. The game also comes with an attachment for gamers playing on the original DS. You are not forgotten, young grasshoppers!

The fret board on the controller, which is actually one of most innovative things about the game, has only four buttons. For the experienced Guitar Hero player this could be annoying since the larger version has five buttons. I remember hearing comments from players about this. Some didn’t like it and some didn’t care. It may not bother you. If you’re a beginner I don’t think the four buttoned fret board will be a problem for you.

It takes some time getting used to playing with your arms crossed. If you tilt the DS slightly it can help make the game feel more interactive like its predecessors. Be aware of the pick-shaped stylus so that you make sure it’s making contact with the touch screen.

I especially enjoyed the whammy bar! The touch screen pictures a guitar body. You can choose a Les Paul, an SG, or a flying V. During longer held notes you touch the whammy with the stylus and slide the stylus back and forth to create the effect. It’s really cool!

Now I’m sure everyone is asking themselves, or maybe even the computer screen as you read this, what about Star Power?!?!

Star Power is interesting. Star Power builds up as you hit the notes accurately. The Star Power meter is to the left of the screen and it fills up as you build accuracy. As is common in the series the star-shaped notes add extra power to the Star Power meter. Once the meter is full the game instructs you to yell out phrases like "Rock on!" or "Rock out!" into the DS mic to activate Star Power. It doesn’t really matter what you say. You could shout "Apple pie!" or "Bumble Bee Tuna!" and the Star Power will activate. Watch out if you choose to do this as the seemingly random and energetic blurts will either annoy your parents or make you appear schizophrenic. You can just blow into the mic or press any of the buttons on the touch screen instead. This is helpful if you happen to be playing on a city bus or in the subway.

The song list is pretty good. You’ve got your punk, alternative and metal. As always you unlock new songs, outfits, and guitars as you progress. Your skill level and accuracy also factor in to how much money you make during a gig. You can make $5,000 or $150 on the same show, so be careful.

All in all the game will satisfy the veteran and the beginner. For someone who has never really sat down to play Guitar Hero, I certainly had a good time. I know it may seem like I have included a lot of things to be cautious of with this game but if you give it a chance you will get into the game and really enjoy yourself.