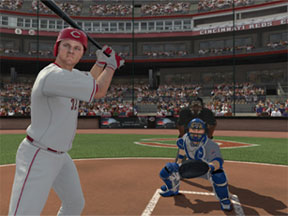 I am writing this review as someone who did not play MLB 2K11 last year. The last game in the series I played was MLB 2K10, and when reviewing that I gave it a highly favorable review. It was still rough around the edges, but the analog pitching, the MLB Today mode, and the engaging and accessible My Player mode (at least in comparison to the NBA 2K equivalent) won me over.

Now that I’m back playing the series with MLB 2K12, I am left with the dilemma of which baseball game I would consider keeping in the long run. I already did my review of MLB 12: The Show for the PS3 and Vita, and it comes highly recommended for owners of both systems. But as for 360 owners, is 2K12 worth the price of admission as well.

From what I’ve played, it keeps all those elements I loved about 2K10 intact, for the most part. The pitching element does have a new change to it. Individual pitches now have a rating based on how successful they are in terms of being used. Throw a strikeout with a pitch, and the rating will go up. Give up a home run or a key hit, and it will go down.

Oh wait; maybe I shouldn’t say a key hit. It seems that any hit will cause the rating to go down. Even if it’s a meaningless single when up by several runs in the 9th, a non-save situation, it will go down. The pitching might not be as strict as NBA 2K’s My Today grading system, but it’s still puzzling. Should there be a MLB 2K13 (meaning that 2K can extend their deal with Major League Baseball,) I hope this gets fixed soon.

On the batting mechanic, I have to say I do tend to favor it over The Show’s for one reason…not having to make any adjustments to the AI sliders. On The Show getting a walk out of the box was highly difficult. It took hours of getting the right adjustments made to get walks to occur. As for 2K12, no adjustments were made, and walks were still common. Even more, the default viewing angle makes seeing balls and strikes much easier to determine. The learning curve is much lower and for those who want a quick game, it will be more than welcome.

Fielding now implements a new dynamic throwing meter that affects accuracy at key moments. It ended up being a curse for me when playing My Player mode at first. As I always play as a catcher, I had a tendency to start my windup before acquiring the ball, but with the new meter, it causes the green spot (meaning an accurate throw) to be very tiny, and even just being a hair off will put my throw in the red, resulting in an error.

I wanted to call it a deal breaker until I found out once I picked up the ball, the green area expanded and the errors decreased. It will frustrate many people at first but when you think about it, it does make sense.

I also noticed during gameplay the AI makes some strange decisions when fielding. Case in point, there is a batter at first and second with one out. The textbook play on a grounder would be to throw to second and then to first for an inning ending double play, but if the second baseman or the shortstop picks up the grounder, there were times he would stumble around before throwing right to first. Once in a while, I can understand it, as fielders don’t completely have a grasp on the ball, but this happened more than the norm.

I tend to play 2K12 more with the amazing My Player mode, as the pace goes pretty brisk and it is much more accessible than The Show’s equivalent. But there are other gameplay modes are worth looking at. The amazing MLB Today mode returns, allowing play of the current day’s games, but now it’s available as a Season mode, allowing players to take part in the entire season as it unfolds. It will be interesting to see how my Pirates will do against the real life counterpart, if they can continue the good play they did the first half of last season with no sign of Jerry Meals to blow a critical call.

Along with the MLB Today modes comes an impressive dynamic presentation. The three man commentary of Gary Thorne, Steve Phillips, and John Kruk are up to date, keeping track of the season in precise detail. The same can be said about the visual presentation, which is chock full of stats that would impress the deepest baseball nerd.

However despite the presentation, the graphics still fall below those of The Show. They are passable, but also have some strange player glitches. I’ve seen players standing in place having a seizure, and there are times the game slows down. This shouldn’t happen in what ends up as the seventh MLB 2K game on the 360. Sure it’s not Triple Play on the PS1, with its horrid frame rate after the ball is hit, but it still is a concern.

In the end, MLB 2K12 is not a bad baseball game at all. It does have its issues, but it stays close to the source material and well worth a look. Granted, PS3 owners would be better off picking up The Show, but 360 baseball fans should be happy with the results here.

And of course, there is that $1 Million Perfect Game Challenge to consider…

PROS: Top quality in-game and pre-game presentation. MLB Today now available as a Season Mode. AI pitching actually can cause walks without any adjustments. Batter’s eye much easier to determine compared to The Show. Analog control pitching still at its prime…

CONS: …but now includes a dynamic rating system that even considers a single as a detriment. Graphics are glitchy, both on players and on frame rate. Throw meter can be a little picky at times for first time players. Some insane AI fielding gaffes.