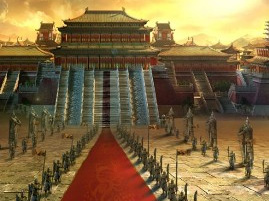 Before I say anything else about Imperial Warfare I want to mention this: the game is deep. I don’t mean deep like step in a puddle and the top of my shoes get wet. I’m talking about driving through a pothole and ending up in an underwater canal system with a manatee named Julian deep.

And deep is good.

So my first order of business is to decide in which country I want my kingdom to be located. The options are Egypt, Rome, China, and Persia. I went with China, because China is awesome.

After that, I picked my hero and started playing.

My first impression of Imperial Warfare was "Wait, what am I suppose to do?" As I said earlier, this game is deep and while there is a tutorial at the beginning, it didn’t even come close to telling me everything I would need to know. This left me spending the next fifteen minutes trying to figure everything out on my own. While I did get it down, I do believe a longer tutorial would have been helpful.

The main hub of the game is, as expected, my city. From here I rule over my citizens and level up many different aspects of my kingdom.

For example, I can level the technology in farm equipment or metal forging and the various different buildings that I have built. To do all of this I need resources. These are easy enough to get a hold of. I just pop outside of my village and see that there are forests ripe for a lumberyard, plains that will soon become my farmlands, and a section of mountains to mine. The one thing about collecting resources though is that it takes time.

This is why Imperial Warfare is the perfect type of game to play for fifteen minutes, set up everything and then check back in to see how the game is progressing. I chose to check up on it once a week, so that I could play for an hour or two before I ran out of resources.

One of the really interesting features in Imperial Warfare is the moving of ages. After leveling my city enough, I was given the option to advance to the next age. This is basically moving from say the Stone Age to the Dark Age or something similar.

The advantage of advancing in ages is that more buildings and technology become available. It’s kind a neat little way to make sure no one can master just one aspect of the game.

Graphically the game could be prettier. The world map just looks a bit too jagged and lacks definition. Also the attempt at creating a 3D model of the heroes could be better. I’m not going to say that this is a game killer, because it’s not, but I had to dock it a little, because a game this fun deserves top graphics.

Overall I enjoyed my time with Imperial Warfare, and while it does have a few small problems, I still feel safe in recommending it to anyone who enjoys a good real-time strategy game. Check it out.

Imperial Warfare earns itself a solid 4 GiN Gems out of 5.