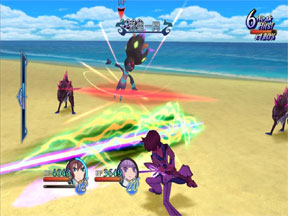 Recently I reviewed a game in the Tales Of series. I got to play Tales of the Abyss on the 3DS, and to be honest, before that I never heard of the series. Tales of the Abyss was above average, so that was my baseline until I talked to my good friend Vincent.
He told me that Tales of Graces F is the whole reason he bought a Playstation 3.

Once I heard that I really judged this game hard because there is nothing I hate more than an overrated game (cough, cough Brink, cough). Now this game fought an uphill battle with me. In addition to being very picky about my role-playing games, I’m also not huge into anime. My lovely fiancee has tried and it just isn’t sticking with me.

So I started playing the game and I noticed the sharp graphics. It started out with meeting the main character Asbel Lhant. Asbel is eleven years old and is with his brother Hubert. I’ll be very honest about something, at that moment I thought "Well, another typical JRPG where some little kid saves everyone." Thankfully I was wrong.

As I made my way through the story line I eventually came to the segment where Asbel and his companions encounter this demon looking thing. After a little conversation it went to a cut scene that looked one hundred percent like I was watching anime on TV. This knocked me off of my seat. I was very impressed with the clean, sharp graphics in the cut scene. Of course the fact they were still little kids was bothering me. To my surprise the game actually advanced seven years into the future where Asbel has almost graduated the knight academy.

Now the game really took off.

The world just kind of opened up in front of me. I worked my way through the story as the hours melted away.

The combat system is absolutely amazing. All of the controls are quick, easy to learn and very responsive. Each person unlocks certain titles which grant abilities, and as you gain spirit points in battle the amount of stars go up. Once you get the hang of this your characters become very strong in no time.

I want to bring up the ability to dualize. In Tales of Graces F you can do what’s called dualizing, which involves combining items to form better items. I’ve always loved tinkering around with stuff on games. Messing around with creating things is why I enjoyed both Dark Cloud 2 (weapons & items) and the Farcry series (maps).

After one mini boss battle I picked up some type of metal and when I combined it with my long sword it formed a wicked looking katana. I’ve spent a lot of time just messing with items just to see what I could create.

As for the story in this game, it’s top notch. The story is far from linear and the characters are very well developed. Often times your party may change, but there is no having to stop and train the guy who was gone. Once a character rejoins they’re just as strong as your main people. And at the end of battles sometimes there are hilarious little endings that I really enjoyed.

Music and sound effects on this game are flawless. I think this game is already an early contender for best musical score. With one of the best soundtracks I’ve heard in a long time, Tales of Graces F defiantly pulls away from other role playing games. The voice acting is just stellar and the sound effects are perfect.

This game was so good that I was thinking about it while I was at work, at school, eating dinner, and everywhere else really. Even trying my best to see if Tales of Graces F was overrated in any way, shape or form…I couldn’t find any. This game should be owned by everyone with a PlayStation 3.

Because of all this, I give my first ever perfect 5 GiN Gems overall score. Tales of Graces F deserves this and more.