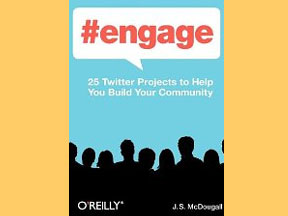 #tweetsmart: 25 Twitter Projects
to Help You Build Your Comm

One of the things I really like about this book is that the author immediately dives into the ideas. McDougall doesn’t spend a lot of time talking about Twitter, or the history of Twitter, or the social ramifications of Twitter. That’s all summed up in a brief preface, which you can skip if you want.

After the preface, the ideas start. There really are twenty-five of them and they all come with their own QR code, so you can scan them with your phone and Tweet the ones you like for a completely meta experience.

Most of the ideas are for companies that sell products, so they are product-centric. However, there are enough ideas that aren’t product-centered that the book is still a worthwhile read if your company sells a service or is say, a publication about the video game industry.

I flagged several ideas to revisit later. Flagged pages are definitely a good sign in a how-to book.

I’ve seen some of the ideas in the book used on Twitter. I’m sure some of these ideas have occurred to you at one point or another, or have been written about in other places. However, it’s really nice to have them all in one spot for quick reference when your boss is on your back to improve your social media presence.

Note: Not that my bosses here at GiN are ever on my back, because they are super nice, but not everyone is as lucky as I am. -End of sycophantic note.

Some of the ideas are taken from other media, like "be the tenth person to tweet," which is a take on the radio caller contest plans of old. Some of the ideas include prize giveaways, which work for some companies, but not others. Some of the other ideas could be easily transferred to other social media like Facebook and Google +, so you’re not confined to just using the ideas on Twitter.

Perhaps the best thing about #tweetsmart is that it inspires you to be creative with your Twitter account and other social media outlets. It makes you reflect on your followers and why they follow you, and how you can get more of them interested and engaged in what you have to say. So if you’re thinking about social media in general and Twitter specifically, check out #tweetsmart.

It will be well worth your time.