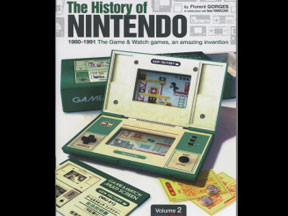 The History of Nintendo Volume 2

The History of Nintendo Volume 2 would have been more appropriately named by its subtitle, 1980-1991 The Game & Watch Games; an Amazing Invention, since there is little in the way of corporate history in this book. Primarily, it’s a collectors guide for Game & Watch enthusiasts.

The book opens with the most sentimental Christmas story of receiving a video game that I’ve ever read. Fortunately, Florent Gorges, although clearly a huge fan, lets up on the sentimentality in the rest of the book. He breaks down the history of the Game & Watch games into four chapters.

The first chapter is a history of Game & Watch games, with a detailed description of their development and technical abilities and their effect on the toy and game industry.

These small handheld’s were an amazing leap forward for their day and were the first real handhelds that looked somewhat like games you would recognize today. They even had split screen technology and mini-arcade versions complete with joysticks.

The second chapter is called ‘The Integral of Game & Watch Games.’ Despite its odd title, which is likely a translation issue, this chapter describes the various categories of Game & Watch games. It’s a thorough chapter that discusses minutia as detailed as box art, manuals and third party labeling. Every little thing about these games is lovingly listed here.

I confess to skimming a lot of this chapter, but I did the same thing with all the minute details of the whaling industry in Moby Dick, so it might just be me. Most importantly, though, this chapter has pictures of every single Game & Watch title.

The third chapter is called ‘Collecting Game & Watch Games.’ It’s an ironic title since the entire book is about collecting these little handheld games, but this chapter goes into rarity, where to find them, how to estimate value and the like. Rare titles are given more attention than they were in Chapter 2 with helpful hints for the collector on what to look for and how to catch fakes.

There is even a section on other toys and merchandise inspired by the Game & Watch games, such as dioramas and keychain holders, promotional flyers and other cool stuff. It even discusses competitors models put out by companies like Bandai.

Chapter 4 is a brief wrap up, discussing emulators that can be found online or in collections for newer Nintendo handhelds.

Do you need this book? Yes, if you’re a huge Nintendo fan or if you collect Game & Watch games, or want to start, or if you’re trying to create an exhaustive collection of something like Donkey Kong.

The History of Nintendo Volume 2 has been thoroughly and lovingly compiled. Having owned some of these little handheld games as a child, I confess to never having had the awe and adoration for them that Gorges has, but they were pretty clever and fun.

Check it out if you’re a collector. You won’t be disappointed.