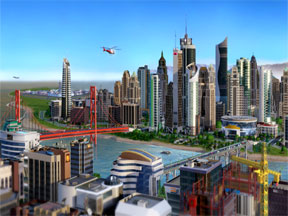 It’s often said that sometimes, simple is just better. I learned that the hard way one night as I grabbed a cup of coffee at a nearby Starbucks. In the mood for something a little different, I added a dash of nutmeg to my coffee. Unsure if that would be enough, I added another – and then another for good measure. Funny thing about nutmeg: a little goes a long way. So I added some vanilla to counteract the flavor, making the coffee even worse. SimCity developer Maxis has created the same problem for itself that I did at Starbucks: they added too many extraneous features to something that, in and of itself, is actually quite good.

Taken at face value, SimCity is a brilliant rebirth of the series. Maxis has done what seemed to be impossible for such a detail-oriented genre in making the game easily approachable, yet at the same time full of depth for the hardcore gamer.

But it’s impossible to take the game at face value, and I’d be remiss in not mentioning it right away: SimCity requires an online connection at all times, even if you’re not playing with other people. The connection is such an integral part of the game that there isn’t even an option to save a local copy of your progress. Everything is saved on Maxis’ servers. Should your Internet connection drop, you can only play for 20 minutes offline.

Couple this with the well-documented server issues at the game’s release, and SimCity had one of the most technically catastrophic launches in gaming history. To make matters worse, Maxis constantly had to patch the game in its early stages to fix myriad bugs, which often meant it took 10 minutes or more of downloads just to find out the servers weren’t up.

The always-online design also creates an interesting in-game mechanic. Should players choose to do so, they can participate in regional play, building their cities in regions that act as a progressive world with others’ cities. The design allows players to share resources and services with one another, as well as collectively building "Great Works" to benefit everyone.

But there’s a flip side to this design as well. Cumulative air pollution from all players can wreak havoc on a region, even for players specializing in keeping their cities green. Additionally, criminals can hop from city-to-city, meaning one player’s game can turn another’s into a nightmare. While there’s always the option to play solo, the game seems designed with other players in mind, and doing going it alone can lessen the overall experience.

Odd design choices aside, SimCity still has a lot to offer.

Menus are fluid and streamlined, with every option logically linked to the next step in a city’s growth. Zoning residential, commercials and industrial areas is as simple as a quick click. A pause button and adjustable time make the game even more user-friendly and approachable, helping new players who may feel overwhelmed.

The first thing every new town mayor has to do is link his or her city to the main highway, with the game prompting you to bring up the roads menu. After that, the next steps to crafting a small town pop up, so you can get a quick start to your new metropolis. Since roads are the arteries through which the life-blood of traffic flows through your city, they’re the most important aspect of the game’s interface.

In setting up a road system, players aren’t just laying down lines of transit. With what may be the developer’s most brilliant design choice, Maxis made roads act as pipelines and an electrical grid as well. It’s simple and may not seem like much, but it allows players to focus on the larger aspects of city design rather than tedious micromanagement.

Oddly, roads can cause a problem later in a city’s development through limited upgrade potential. Roads and avenues are upgradeable in size, but it’s impossible to turn a road into an avenue. So anytime you’d like to put a higher density avenue where a road is, you have to bulldoze the entire street ‘ and subsequently anything you’ve build on it too. It’s a massive headache and can cause city layouts to get turned upside down in the blink of an eye.

Sticking along the same roads theme, Maxis also included the option to build curved roads in SimCity, something the franchise has never had before. From an aesthetic point of view, it’s an excellent addition. From a practical point of view, however, it’s pointless. The game is engineered around a grid-based system, and curves simply have no place outside of the creative sandbox mode.

City specializations are another addition to the game, and these require an intense amount of planning early on. The six specializations are drilling, mining, electronics, gambling, trading and culture. Where you choose to build your city has a direct effect on some of these, such as the amount of coal and oil available for mining and drilling respectively.

Gambling, on the other hand, doesn’t require resources, although it’s a good idea to place casinos in high-traffic areas of a city, as well as putting heavy investment into transportation and tourism. That’s where the early planning comes in. Because cities are so difficult to redesign after the basic road layout is made, not having a clear plan in mind is a great way to ruin any plans you may have had on the backburner.

City boundaries don’t expand either. Your starting plot of land, although sizeable, is the one you’re stuck with. Once a city reaches those borders, it’s not pushing beyond them.

That said, hardcore players have a lot to like in their options, and the specializations make cooperative play really shine. For instance, a town that specializes in mining requires a large supply of low-educated workers to meet its labor needs. Unfortunately, low education also leads to higher crime and fire rates. A neighboring city that has spare police and fire trucks can help take the strain from the mining-specialized city, earning some extra cash for outsourcing its services in the process.

Graphically, SimCity looks great from afar, with gorgeous colors and building detail imbuing a true sense of accomplishment when looking down on your creation. Zooming in, the detail tends to fade a bit, but the ability to follow individual sims around is a nice touch.

In terms of audio, the game gets the job done, although after a while, the sound of incessant sirens can become an annoying drone.

All things considered, there’s a ton of content in SimCity, and it’s something that any strategy and simulation fan can easily get lost in for hours at a time. The game features a list of design and city-management options that could take up another 1,200 words themselves. The launch bugs are mostly exterminated, and constant updates from Maxis have improved the overall experience dramatically.

That said, SimCity is far from a perfect game, largely down to its technical issues. It’s a game that requires a tremendous amount of patience and understanding, and although more approachable than past iterations of the franchise, it still caters to the hardcore fan in more respects than not.

SimCity earns 3.5 GiN Gems out of 5 for being an imperfect relaunch of an iconic gaming series.