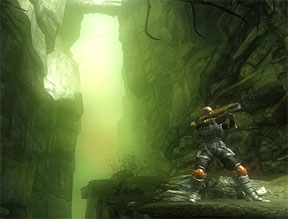 As the screen lights up, a hover cycle glides across the monitor. The setting sun is in the distant background setting the mood, for greatness. Our tough biker takes a short break from his journey across the barren land to buy a shotgun? Yeah, made no since to the sniper a short distance away either, so she shot him. Our sniper stands over her freshly wounded victim, since she didn’t have the talent to headshot him, drops a quick one liner, then finishes the job and then takes off with his shotgun and hover cycle.

Before diving too deep into the gameplay, art and the features that make or break the game, let’s get the story out of the way. World War III destroyed the entire known world, turning into a barren landscape with no hope…okay it’s not that clichÃ©. The Continoma Project, led by the Continoma obviously brought back civilization by outlasting all of those around and by storing memories and then feeding them into clones. On Enterra, they battle a former Continoma leader and his rebels Noir. Yeah it’s the typical good versus evil theme. It felt very Babylon AD like, the idea that a former leader rebels to leads a rebellion against his former group, accusing them of crimes against humanity, very clichÃ©. Players jump into the world’s struggle for power using futuristic high tech equipment while savvy techno metal keeps them motivated, Moby meets Five Finger Death Punch anyone?

Now that the world has been mapped, lets hit the highest point of the game, art direction. That may seem odd to players but it’s the truth. The opening sequence is a high point that will stick in the mind of the gamers. Nikolay Stoyanov is a masterful director whose talent doesn’t shine through, it blasts through in a hellacious fury of cosmic fireballs and lightning bolts that would make Zeus crap his pants, yeah it’s that good.

The video sequences are flawless and the world is brought to life in this game. The most impressive part of Earthrise is world itself. The world makes the game and although it appears very much like Mass Effect 2, there are enough differences to set itself apart and sky rocket it above any other game out there.

For those hardcore gamers who break down every aspect of every character option to get the best skill set, no need to do that with Earthrise. Skill sets are open to any character you choose no matter what race. There are not a lot of options for the player’s character but after armor is added it doesn’t really matter because none of the options are visible. Some gamers will scoff at the boring character creation where some will just be glad they don’t have to diagnose each race to get a great skill set.

Once the player has created their clone they are ready to get acclimated to the world. The player is put through a few tutorials including an obstacle course and combat actions. Upon completion the player is dumped into Exodus and oh what fun this place is. Exodus is the first stop for players so is one of the most populated, so expect to be in lag hell. As the player moves deeper into the game it gradually returns to real world speed and the lag is extremely reduced. It seems as if there was a lack of preparation and the servers could not compensate for the amount of players. Hopefully this will be fixed or at least doctored to make it less of an issue and more of a slight bump in the road.

As the player moves on don’t expect any help, there are no quest markers which make finding locations another huge complaint. Why the developers thought every gamer was a descendant of Christopher Columbus is still a mystery.

Players who are drooling over the PvP (player versus player) should be aware, do not play alone. The biggest disappointment was the fact that a player could kill you and take your gear without fear. It will be extremely frustrating for players to work and work to get crafting items and money just to have some random ninja wannabe come up behind you, pop you in the head and take your junk. Bye bye junk and hello starting over again.

It is important to note that killing monsters is a very important part for character progression. Killing creatures results in crafting supplies, money and skill points. It becomes very tedious, but that is common in any MMO. As for the gameplay itself, it seems to run rather smoothly but expect plenty of obnoxious animations glitches as the player runs and moves. The main area for concern seemed to be some transitions when jumping but hopefully those will get patched at some point.

The crafting system is not only a good point but it is also a point of caution and a nuisance. Players must find crafting stations to create new equipment but enough crafting supplies have been acquired through combat and this is based on if the player survived those predators who seek to kill and loot everyone that stumbles on their path.

So, should gamers buy into it? There is a 50 dollar price tag on the game with another 15 bucks a month being forked out to play online. It’s rather pricy for a game whose cons out weigh the pros. Amazing art and scenery, good soundtrack and the mildly boring character creation doesn’t rectify the clichÃ© story, somewhat laggy and glitchy gameplay, and the iffy crafting system.

Still, at least it’s an attempt to get away from all the elves and trolls out there in the MMO realm. And for that alone, some of you may want to give it a try.