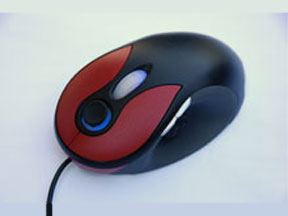 I’m a gadget and games kind of guy, and as such, I like trying out the next new toy that’s going to be pushing its way into the gaming world. There are two motivations behind this mindset: 1) I want to spread the word on what works well, and 2) I want to warn people about specific junk items that find their way onto the market.

Not too long ago, I was given the chance to place Sandio’s new 3D Game O2 mouse under scrutiny, and the results were somewhat uplifting.

I’d say that for many gamers "control" is a key word. Without control, your WWII fighter plane crashes into a mountainside, or your BFG gunman stands motionless while enemies hack away at your life bar. Without control, there is no gaming, and while Control may carry with it a capital C, the ways of control vary among all of us.

Many off-console players have gotten used to the standard keyboard/mouse combo, but every once in a while, a company comes along with a product that tries to give us something new in the ways of moving through a level. A lot of the time, these new methods are shots in the dark, and they don’t make it past an opening battle, but there are some that surprise us with their connection to pre-existing models.

A case in point is the O2. Looking at the design of the O2 (which is a huge step up from their previous model) we see that it looks like a standard computer mouse on steroids. In addition to the guiding laser underneath, the left and right buttons, and the scroll wheel, the O2 comes equipped with two extra buttons and three joysticks located on the front and sides of its frame.

The whole point of the mouse’s design is to allow fluid movement on x-,y-, and z-axes without the use of a keyboard or on-screen menu functions.

I took the 02 to task on Google Earth, trying it out on something simple before moving on to the main course.

First off, let me say that I love Google Earth. In South Korea, the kids found it hilarious that we could use Google Earth to peek in on North Korea, but I found it even more amazing that I could find my exact apartment building in near vivid detail, and when the O2 showed that it could make guiding my way through this program much easier, the mouse made it to the next step with an excellent first impression.

Just by considering the idea of what the O2 proposed, I could see how making use of the directional joysticks could be helpful with design programs as well. Rotating and manipulating a 3D character or setting would be beneficial to a graphics artists, and the O2 allows you to do just that. Combine this with its nice design and professional packaging, and you have a product that you could see being sold on a wide scale.

So, on a graphic arts and 3D object manipulation scale, the O2 scores pretty high, but when putting it to the test against its other intended audience, that favor begins to drop in some instances.

Playing with a strategy game, the O2 still holds its ground. You can move easily through a world and the extra buttons come in hand in terms of controlling your hordes, but with a shooter, the O2 has its complications.

I tried it with Half-Life 2, which was one of the 40 preprogrammed games that came with the O2’s software. I’m not going to say that playing HL2 with the O2 was a complete chore, but it certainly wasn’t as fluid as I’d hoped it would be. The hand motions needed for some movements were difficult to perform in many cases. There’s a possibility that this could be overcome with more O2 gaming experiences, but a lot of gamers out there won’t take the time to acclimate their habits to a new device.

Now, having said that, I will go on to mention that using this mouse with the keyboard was very rewarding. For me, having the extra options for character control is always a welcome factor, so when using the joysticks for base movements provided more finger use for certain attacks, I was more than happy to have them, and I think that can be said for any genre of game.

Looking deeper at the specs, the O2 has a lot going on for it in terms of 2D mouse components. Its laser is top of the line and is complimented by four DPI settings (2000, 1600, 800, 400) that can be switched through at the push of the scroll button. The mouse also comes with a detachable base that makes certain programs and games easier to navigate.

As a new product with uses that fall back on currently existing technologies (aka the favored 2D mouse), the O2 has a lot going for it. The mouse has legitimate uses that can be applied in the world of both gaming and design, so I would say that the price tag of $80 is well warranted.

The only upsetting factor with the O2 is that it’s not Mac compatible, which is a major hit to the mouse since Mac has so many design programs that this could work with.

Otherwise, after getting used to the new movements and capabilities, the payoffs are certainly there for the taking, which makes the 02 a great choice for designers and something definitely worthy of a gamers attention.