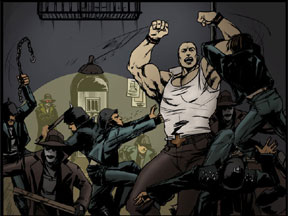 I’ve often found that both comic books and video games have each appealed to similar audiences, not to mention suffered through much of the same social trials in their struggle to be taken seriously as an artistic medium. However, aside from titles like Comix Zone for the Genesis and XIII for the PS2, the two mediums have rarely overlapped in a way that one might call definitive.

Enter the title Exile, which seeks to blend the world of the comic with the interactivity of the video game. And while the attempt doesn’t exactly hit the mark of mind-blowing, it certainly passes the time well enough.

In this game/book, a portal that leads to an off-world wasteland has been discovered, and the government-in its infinite understanding-decided the best thing to do with that portal would be to start banishing convicted felons away from our population and into the desolate wasteland that resided on the other side of the strange interstellar doorway. You would think that Borderland’s Pandora was on the other side.

This practice has flourished for years, to the point that an alternate society has sprung up on the planet of Exile. There, crime runs rampant among the (seemingly) all male population, but all that changes when a little girl is found wandering the streets of Exile. Seemingly invincible, the child walks among the criminals and is discovered by a street brawler with a heart of gold.

What’s delivered in exile is little more than a slightly interactive motion comic. In most instances, what it really reminded me of was a simple game of eye spy, but that’s not to say the elements of a video game aren’t there. In Exile, we have Easter eggs and achievements. But the meat of a traditional game aren’t uncovered until you get into the extras portion of the download.

For the first issue, Exile contains a mini-game called "Don’t Get Shot," which plays exactly as it sounds like it would play. On the square screen, the camera is looking down on a street scene. On the outskirts of that screen are gunmen placed in strategic places on the board. At the end of a countdown, they all fire simultaneously and your character has to be in the area the bullets aren’t going to touch by the time the counter reaches zero. Pretty simple stuff, but a gratifying enough mini-game to include on the extras.

Exile suggests that more of these types of games will be provided as the issue numbers increase, and as long as the developers continue on with this line of simple yet engaging style of distraction, I could see them doing well.

The extras menu has several other sections to it, including soundtrack, concept art, etc., but these features won’t really draw you in unless you get hooked on the comic series.

For me, the main question that seemed to be making itself present was simply "Did this need to be created?" I’m all for pushing the boundaries of how stories are presented, but for the most part, I worried that the interactivity of this project wasn’t pushed far enough to the limit.

For a project like this to really work, I’d venture to say that there has to be a human face attached to the product. With that in mind, where are the production notes? The creator commentaries? Shots of the developers working in their office/garage? Sure, there’s concept art, but nothing that indicates this was the work of a start up business other than the sometimes lackluster presentation.

Without these features, the product becomes an exercise and little else; something that is as easily picked up as it is put down. You can check it out for yourself at their Website http://ournewgame.com/.