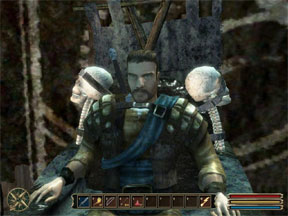 Editor’s Note: Having played every game in the Gothic series, Ryan Allen is a perfect choice to give us a history of this franchise, and to see how Gothic 3 measures up.

In 2001 developer Piranha Bytes under the label Xicat Interactive released a quaint computer role-playing game simply entitled "Gothic." You assumed the role of a nameless goateed hero who is wrongly incarcerated within a magically shielded prison colony on an island.

Surprisingly Gothic 2 picks up where the first left off. The plot expands to encompass new dangers caused by a group of powerful dragons, Orcs overrunning the decimated prison colony, and an ancient evil. Rumors surfaced within the gameplay of Gothic 2 about a huge invading force upon the mainland. Nearly four years later Gothic 3 is released letting our unidentified (and still goateed) hero — you — travel to the mainland with a cadre of companions to confront new threats. True to Piranha’s method of picking up where the priors left off, Gothic 3 continues where Gothic 2 concluded: a sail-off-into-sunset cliff-hanger.

In Gothic 1 and 2 the island of Khorinis was the central point where the story unfolded. Gothic 2 resuming where Gothic 1 concludes gave the storyline a great amount of weight. Locations and characters that were introduced within the first game reprised their roles. What was once good becomes evil and visa versa, all within the scope of an ongoing story that kept me engaged and interested.

Besides the bugs one of my biggest gripes with Gothic 3 is a lack of interest. I know that the main continent of Myrtana is part of the unfolding storyline. However with this change of venue something feels different. The magic that kept building upon the Gothic story in the prior titles feels gone in Gothic 3. Perhaps it’s the feeling of redundancy in that plot devices such as the magic shield around the Kingdom’s capitol feels similar to magic shield around the Prison colony from the first game. It’s hard to say for sure with any sort of specificity. But I am trudging along to observe how the story unfolds.

Having played both Gothic games I can tell you that Gothic 3 is a significant visual enhancement over its predecessors. In many areas such as cities, along riverbeds, in the desert, and up north in snow country the engine excels in ways the prior Gothics could only dream.

Unfortunately the engine produces mixed results. For example while creature mobs such as Minecrawlers, Lurkers, Snorting Beasts (aka dinosaurs), and Gargoyles are visually intimidating (not to mention very tough hombres), humans appear strange. All the Slaves in Gothic 3 look identical. They have an odd anatomically incorrect combination of starvation with muscle mass; particularly around the stomach region in what appears to be bulging six-pack abs. Several humans have facial features such as incredibly large noses, uneven ears, and so forth that seem to disobey physical laws.

Another strange artifact is the way in which lighting works. Shadows created from housing objects, jutting cliffs, and torches produce excellent effects. However there are slight oddities whenever sunlight makes direct contact with any "white" surfaces. While a glowing sheen is appropriate upon metallic surfaces this patina is odd upon stone steps, wood, brick, and skin surfaces that shouldn’t naturally glow.

Based on your graphic settings view distances appear bathed in a sunlight soaked hazy horizon that works well in some environments — the desert (aka mirages) and snowy north (light reflected off snow) — and not in others (the woodlands). Surprisingly I found the lack of light fantastic. Unless you come across some sort of external light source (a bridge with torches for example) traversing the woods at night is a laborious task. Couple this with environmental sounds and Gothic 3 can be frighteningly real at times.

One of best aspects of Gothic 3 is the musical score by Kai Rosencrantz. For the first time a Gothic game has a fully orchestrated film quality score. Kai assembled an impressive ensemble of talent that runs the gamut from Germany’s Bochum Symphony Orchestra, Prague’s FILMharmonic Choir, over to the east for the Japanese Taiko band GOCOO, and back to the west for film veteran Lisbeth Scott (whose singing can be heard on Passion of the Christ, Kingdom of Heaven, and many others), to name a few.

As noted in the preceding paragraphs environmental sounds are better than past titles. Subtleties such as low rumbling bass inside caves and woodland creatures helped define the overall atmosphere. Similar to the prior Gothics, all towns and rebel encampments are filled with idle conversations from many residents. Most of the information discussed is useless but they help add life to each location.

One of the cornerstones of the Gothic games has been fully vocalized dialogue. This is something that was established as a standard part of the gameplay since the first Gothic. Back in 2001, when other equally sized role-play games still continued to use text dialogue, Piranha fully vocalized the content so that gamers could listen to the story unfold between characters. Since then many RPGs have followed suit.

Regrettably while there has been notable exceptions (Patrick Stewart and Sean Bean in Oblivion, HK-47 from Knights of the Old Republic, most of vocal acting for Beyond Good and Evil, and Michael Ironside as Sam Fisher in the Splinter Cell titles… to name a few) voice acting, like the kind found in Gothic still needs improvement. Many lines were delivered monotonically. It would have behooved Piranha to at least try and hire top quality vocal talent this time around.

General problems with movement and camera angles are still present in Gothic 3. Occasionally when coming to a stop after running there seems to be this bizarre inertia that sends my nameless avatar forward a few steps. This isn’t a big deal in towns but it is a big deal when fighting with Ogres.

The interface has also gone through huge changes. In prior games the most you would see of the game interface was a basic health meter for your avatar. Gothic 3 introduces brand new UI elements such as radar, hotkey bar, and a robust health meter showing health, stamina and mana. Additionally the interior menus show skill branching, quests, spells, inventory and map all of which can be quickly access via hotkeys (e.g. M for map, L for quests, and so forth).

By far the best and most welcoming enhancement is combat controls. Gone is the left-right arrow key/mouse combination that made Gothic 2 a huge pain to play. All combat commands can be performed from the mouse freeing up your keyboard fingers to drink health and mana potions. Pausing combat to visit your inventory for spells is a nice addition as well.

For the first time earning faction points is a centralized aspect of gameplay. It’s one of the main facets that generally kept most of storyline fascinating. Factions are divided into three majors (Rebels, Orcs, and Hashishin) and three minors (Nordmar, Rangers, and Nomads). You can choose to aid the Rebellion against the invading Orcish forces. Given your disposition, play style — and perhaps mood — you can abet the Orcs and destroy the Rebels. You can choose to remain neutral during the conflict and turn a tidy profit by assisting the profiteering Hashishin. In theory, and given you have the strength, you could conceivably wipe out the entire continent of Myrtana and become the ruler of it (of course with no one alive who do you rule?). Gothic 3 has that much freedom.

About thirty-percent of the game has been bugged for me. The only reason I continue playing is the overall storyline from the prior two games. I really want to see where this one goes.

Within the last thirty-six hours (of writing this review) I’ve encountered an assortment of strange problems.

Camera angles tend to rapidly flip-flop after coming out of dialogue. Camera angles also tend to swing into weird position such as half inside a rock face or half inside a building. On certain slaves neck-chains misalign out of place. Shadows sporadically produce odd void-like holes on characters faces.

Some targets seem to defy physical laws through an ability to go from ground to roof and back to the ground in a few steps. Despite the position differences both my avatar and target are still attacking each other. Targets also seem to avoid falling over cliff edges or outright standing in mid-air if a fence is present.

Low level creatures such as wolves and boars perform quick little burst attacks that prevent you from defending yourself. Nothing is more embarrassing than getting killed from a single low-level wolf. A couple times avatars would collision-die through solid objects (similar in how some avatars used to die near doorways in Oblivion).

Probably most annoying is the fact that my character has reached the requirements to learn duel-wielding yet no trainer will teach me this skill. I’m beginning to wonder if this skill even exists. I’ve heard you need to reach a certain level but level 27 is high enough in my estimation.

While I’ve read messages from others saying the game randomly crash I’ve been fortunate not to encounter this issue.

Piranha quickly released a patch after launch that fixes some of these bugs, however many remain. Sadly many of these bugs could’ve been eliminated with a couple more months of QA and testing; a problem that seems to be an industry norm these days.

Unfortunately any praises given to Gothic 3 within this review are negated by The Elder Scrolls: Oblivion. Oblivion set the bar so extremely high for single player role-playing games that Gothic 3 regrettably can’t match it. While Oblivion suffered from an enormous catalog of bugs (almost all have since been fixed) the sheer incredible amount of immersion, freedom, exploration and addictiveness is something that Gothic 3 sadly lacks. If your decision boils down to purchasing Gothic 3 or Oblivion I absolutely recommend Oblivion.

All things considered as a fan of the Gothic series this third iteration is a welcomed addition. I highly recommend it for series fans. For everyone else the quirks and bugs will probably drive you mad. However if you can look past them then Gothic 3 could perhaps be a game to your liking.