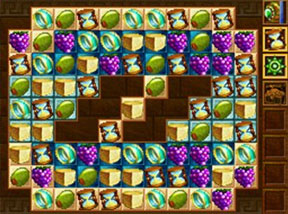 In particular, that I can dislike a game even if it gives me all the things I’m frequently complaining that other games lack. I feel really bad not liking this game, honestly. It has a lot going for it, but nothing that drags it up from feeling like a so-so mini game that got packaged and sold as its own product.

“Jewel Link Chronicles: Legend of Athena” is the kind of game where the number of words in the title alone should tell you it’s trying to compensate for something. “Chronicle” and “Legend” together is a dead giveaway.

Inside, the game stacks a few different layers of activities together in an attempt to create relevant depth of play. In the majority of the game, you swap pieces on a 9×11 board to match lines of three or more which disappear and are replaced from above. This standard mechanic has a few new and interesting twists in that every board is differently shaped, and that these different shapes mean that sometimes the board refills itself with pieces falling diagonally rather than straight down.

Progressive boards become trickier with squares missing from the middle of the grid or chained squares that only become playable when they’ve been included in a match once or twice. Some squares are tan while others are light or dark blue. Making a match over a light blue square turns it dark blue, making a match over a dark blue square turns it tan. The basic objective for completing a level is to turn all the squares tan, which releases a special piece onto the board. Get that special piece to the bottom of the board, and you’re done with that level.

The basic game is not a bad time-waster, and I really want to like it for shaking up the “Bejeweled” formula with novel motion and level design, but I just don’t. The diagonal refill seems more random and frustrating that interesting. On inconstant playing fields of such small squares, it’s hard to achieve the sense of planning and maneuvering that make matching-activity puzzle games feel like an intellectual challenge rather than a brute-force struggle.

Further complicating any sense of board awareness is the problem that several of the pieces you are given to swap around the board are both very small and very close in color to the squares behind them, making viewing the board as a strategic situation difficult and biasing the eye against finding some of the pieces that you need to achieve goals beyond the immediate matching game. And as if in recognition of this problem, the game includes special pieces you can collect to deploy actions that can help you brute-force a difficult puzzle into submission, and this helps alleviate immediate frustration with specific boards, but the overall frustration; that the gameplay is sketchy enough that eventually you just prefer to brute force it; remains.

I often complain that I want a game to have a framework that makes it feel like you’re building towards something useful, and Jewel Link has that. The pieces you match in the matching game are actually “collected” (if you manage to finish the level) and collecting certain amounts of the various resources enables you to build buildings. I often complain that I would like games to throw in filler that is educational in some degree as long as they’re throwing in filler, and Jewel Link has done that, too.

It uses the names and images of real ancient Greek buildings for the stuff you build with the resources you collect, together with blurbs that are educational without being heavy handed. You build four buildings per era, and each era is separated by a “fight” against a hoarde of mythological creatures (simulated by matching the creatures in the same basic matching game described above) like the cyclopes or medusae which, again, is mildly educational. I should totally be in love with this game, right? Meh, not really.

As with the matching game itself, the framework just isn’t that interesting as a game. There’s very little strategy or involvement in deciding what you build, so eventually the wonder of ancient greece is just one more score point to grind for. And as it turns out (which I didn’t realize the first time through, ho ho hee hee) if you complete all 100 levels without managing to finish the entire city, the game informs you that you have not impressed the gods enough to claim your place in immortality…but hey, you can start all over again! Great…

The game has one of my favorite things that a timed time-waster can have, a “relaxation mode.” Good right? Sadly, again, not really. The “relaxation mode” is the exact same game on the exact same timer, just not connected to the whole collect-and-build “storyline.” For my money, that’s not really relaxing. See Bejeweled Twist for a real “just doodle around to your heart’s content” zen mode.

The one stand-out thing that I do really enjoy about Jewel Link is the music. It’s pleasant and atmospheric and simple without being grating, dull, or repetitive. Really well done. Much more relaxing than “relaxation mode”. Sadly, the music being good just kind of makes the rest of the product seem more inadequate by comparison.

The spirit and atmosphere of this game is great, one of my favorites so far. Ultimately, I do feel bad that I don’t love a game that is trying so hard to make someone exactly like me rave about it. Sadly, it fits into the growing category of games that would be really outstanding add-ons to a more complex and complete game, but as a stand-alone product just seem lacking in depth and interest.

That, or I’m just unforgivably picky. Jewel Link Chronicles: Legend of Athena only earns 2 and half GiN Gems.