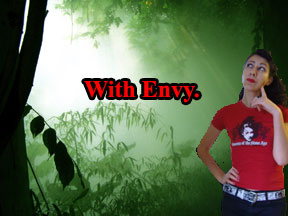 For the past eight days I’ve been living in a field at the legendary Glastonbury Festival – living it up with the hippies and rocking out in the mud. There’s not much about Glastonbury that lends itself to a column about videogames, so you’ll have to humour me and my tenuous link.

Every year, I go to Glasto to help my boyfriend set up a large outdoor artwork and we stay in the part of the festival known as, Green Futures. All the stages are powered by wind and solar power, the food stalls are vegan and it’s pretty much the heart of the festival that began 41 years ago. The activities in the Green Futures fields are all about green crafts, living sustainably and making a difference.

Glastonbury Festival, as a whole, is committed to supporting environmental and humanitarian charities including Greenpeace, Oxfam and Wateraid with the moto, Love the Farm, Leave no Trace. This year’s environmental theme seemed to be about cutting consumerism. Signs urged festival-goers to think about buying what they "need." not just what they "want." One large sign was surrounded by a frame of empty PC monitors, CDs and toys.

The message is a thought-provoking one and a hard one to tackle when you are part of an industry that is fuelled by wanting and buying the latest thing. The next game, the next console – there’s no getting around the fact that gaming is about wanton consumerism. But this doesn’t mean that the games industry has to turn its back on becoming greener.

In fact, Ubisoft is leading the way on the road to greener gaming. 2010 saw the French publisher launch packaging made from recycled cardboard. It may not sound like a major move, but consider this; in 2009, 273.5 million game units were sold in the US alone*. Now that’s a lot of packaging, which means mountains of plastic, not to mention the paper used in all those manuals.

Apparently, Ubisoft also tried ditching its manuals to reduce the amount of paper, instead offering digital versions. I have to say, I haven’t seen any of this eco-packaging from Ubisoft, but you’ve got to give the publisher kudos for trying, even if, one year on they have given up. Unfortunately, the announcement from Ubisoft just created a gamer-wide lament for manuals, rather than a cheer for the effort.

I for one would like to see less plastic in game packaging, but the industry seems to be very quiet about any effort it’s making, if any at all. I’m sure all the big companies have their Corporate Social Responsibility (CSR) policies, which probably include less staff air travel, reduced energy consumption in offices and the like, but it would be nice to see the changes on the shop shelves. Sadly, I suspect most gamers think I am now, officially a tree-hugger and don’t see why they should give up their manuals to save a tree.

Environmental concerns are no longer the bean sprout fuelled ramblings of crazy hippy types. If the motor industry’s taking it seriously, then it’s about time the games industry did the same. My copy of Assassin’s Creed: Brotherhood came in a plastic box with a nice, shiny, thick manual, so I’m guessing Ubisoft tried and gave up on the whole eco kick. It would be interesting to know which publishers and console manufacturers are taking strides towards greener gaming. If they’re out there, it’s time to start singing about your green credentials.

Solar powered 360s – now that’s the green future I like the sound of.

Most played: don’t lose your welly in the mud