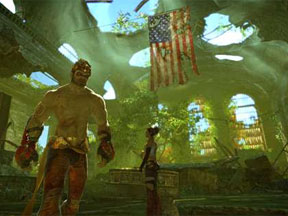 Enslaved: Odyssey To The West

Wow! Enslaved: Odyssey To The West is simply put: Wow! Finally, something new and exciting comes our way, not rehashed, or spun-off from a former hit, but instead raises the bar for action-adventure platformers, and the results are amazing. I can’t remember the last time I used the word "perfection" in a review, but Enslaved is one game that’s surely nothing less than that.

Loosely based on the classic Chinese novel, "Journey to the West," Enslaved: Odyssey to the West slowly unfolds the misfortunate lives of two slaves who are about to deal Fate a one-two punch as they take advantage of a minuet window of opportunity and set off together against all odds to change their uncertain futures. Co-written by Tameem Antoniades and screenwriter Alex Garland, both known for being involved with the "Heavenly Sword" project on the PS3 platform as well the script work behind block-buster movies "28 Days Later" and "The Beach" as well as directed by Andy Serkis, famous for his portrayal of Gollum in "Lord of the Rings" and Kong in "King Kong," Enslaved is one game whose story line is destined to be compelling put together by a cast of truly talented and accomplished individuals.

Set 150 years in the future at a time when war and destruction has left in it’s wake a nearly extinct human race and a thriving "machine" presence, we find Trick, a tech-savvy rebel with a severe case of homesickness and Monkey, a random drifter with a talent for smashing up things and the temper to back it all up. Both are being held captive on slave drop ship "9-0-9" headed for a mysterious place known only as the Pyramid where they’ve been told a new and better life awaits them…whether they like it or not.

What they don’t know yet is that these two complete opposites are about to cross paths after Trick hacks the locks on her cell to free herself, and overrides the other prison locks consequently freeing Monkey as well. What happens next is an epic and death-defying struggle to escape off this massive slave ship, which is suddenly experiencing major system failure with every man and woman for his or her self.

Following their dramatic escapes, the two find themselves planet side amidst the vast ruins of the old world. Nature’s overgrowth has reclaimed much of what used to be and there are new and more present dangers lurking out in the unknown. Trick is fully aware of this and knows if she’s going to have any chance of seeing her home again she’s going to need to employ the help of the very hot-tempered and extremely stubborn Monkey.

Knowing full well that at the moment he probably doesn’t give rat’s behind about her situation or her well-being, she cleverly reconfigures an old slave restraint headband used on the drop-ships to keep captives subdued, and places it on Monkeys head while he’s still out cold from their recent crash landing. Poor Monkey awakens to find himself at the mercy of Trick. The deal: Get her home safe and win his freedom. Of course, the present situation makes for a little less than rocky partnership between the two, but regardless of the fact they both quickly grasp the certainty that without the help of each other, they don’t stand a chance in hell.

The world of Enslaved from characters to creation is a visual masterpiece. Portrayed as a futuristic wasteland with a dangerously wild karma to it, you fully get that Monkey and Trick are all alone in this massive mechanical jungle. The levels appear to go on forever and are cleverly filled with many featly obstacles, hidden treasures and dangers as well as everything in between. What’s truly special about the physical game world is that it takes on such a life of it’s own that it makes the player feel like even though there are bad things out there, that want nothing more than to spill your blood, you get the sense that if you don’t respect it, nature itself will gobble you up. This adds a real survival tone to the adventure.

By far the most impressive visual feat in Enslaved and possibly in any next-gen title to date is "character expression." You will be instantly floored by the level of detail and expression in the faces of our heroes. I honestly cannot recall a game where this has been pulled off so well. What makes this accomplishment such a huge deal is that the mood and tone of every cut-scene is flawlessly pulled off and as a player you instantly connect and become drawn not only to the heroes but to the experience as well as the adventure as it progresses on. Major kudos goes out to the developers for pulling this all off. Gone are the days of emotionless facial expressions and lip-chopping animations. Enslaved sets the bar for future games to come.

All of these graphical achievements are complimented by a dynamic sound engine. There are several adrenaline rush moments during the game acclimated by racy music tracks and big sound effects that in some cases will honestly send a tingle up your spine or raise the hair on your back. Add to this phenomenal voice-overs pulled off so well that it makes each character seem so real and believable, you find yourself really buying into their circumstance and situations. This is a game that could most definitely be pulled off as a big-screen blockbuster if enough thought were put into it.

Game play wise, you’re going to say to yourself more than a few times this feels like this game or that game as some of the elements of the combat engine will feel familiar. Prince of Persia, Assassins Creed, Ninja Gaiden, and God of War are just a few that come to mind. Now this is definitely not a bad thing as anyone who is familiar with these games knows.

There is however one defining element of game play that actually separates Enslaved from the rest of pack: realism. The wastelands are filled with mechanical combat bots simply referred to as "mechs" who govern the ruins and carry out the will of the slavers relentlessly. "Man vs Machine" encounters have never felt this realistic in a video game. You don’t have to worry about a game muddled with ridiculous super combos that, while they look flashy, don’t come off as being believable. Instead you have a simple combat system that gradually builds and becomes lethal over time and doesn’t lose its authenticity.

The mechs don’t just drop and explode with a few hits either, and if you’re reckless enough they can easily turn the tide of battle on you. More than oft you may find yourself beating the crap out of a mech and suddenly have to evade because it parries and nails you a time or two. This is actually very realistic in a flesh vs. metal scenario and more importantly it feels believable leaving you with a sense of accomplishment after combat encounters.

Besides combat, the game throws several puzzles at Trick and Monkey as they navigate the terrain. While Trick is the perfect fix if you need a system hacked, she lacks any real athletic or combat skills, so Monkey will often have to keep an eye out for her safety. Likewise, Monkey will need to rely heavily on her to safely navigate his way through the eminent dangers of the wastelands. Even though players control Monkey throughout the entire adventure, they will feel like they have someone watching their back in the company of Trick. It’s a beautiful collaboration between player and CPU.

Listen, the bottom line is there aren’t enough words in this review to truly describe how amazing a game Enslaved really is and I’ve already said a mouthful about it. You need to own this one, period. You’d be squandering away a great opportunity by letting this one sit on the store shelves for too long. From visuals and presentation to combat and puzzle solving and so much more Enslaved is the one thing I haven’t had the privilege to say about a game in a very long time: Perfect.