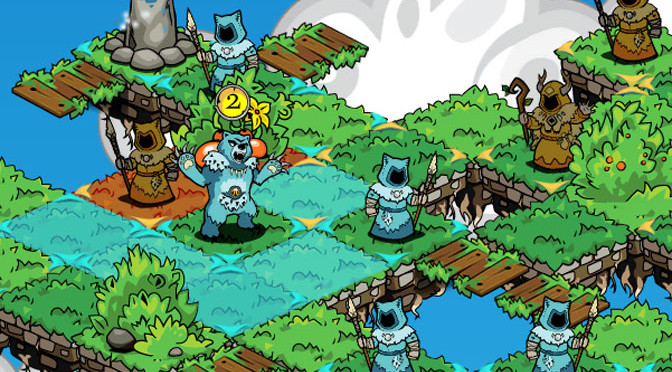 A Druid’s Duel, subtitled, “A challenging game of strategy and mischief” is a turn-based strategy game set on grid-based stages without any actual mischief at all. There’s plenty of strategy to be had as players face off against AI for over one hundred levels of turn-based tactical fun or against other players online. This is in stark contrast to mischief, which evokes thoughts of plastic wrap under the toilet seat or your underwear hanging from a flag pole, you know, the kinds of occurrences that too often happen at a band camp (I hated band camp). Thankfully, you’ll never have to worry about A Druid’s Duel stealing and subsequently displaying your Spongebob undergarments for all to see.

As stated previously, A Druid’s Duel takes place on stages of various sizes set to a grid, much reminiscent of a board game. Each tile of land on the stage will produce different amounts of mana each turn and mana is your currency to doing practically everything in the game, from summoning units to activating abilities or even placing bridges for traversal past choke points. Being frugal with your mana is of no consequence in A Druid’s Duel, because mana does not carry over from one turn to the next: If you have it, you should use as much of it as possible. This kind of system makes planning your mana usage on each turn essential. Tiles are captured by moving a unit onto the space for that player’s use, meaning it can be used to generate a unit once unoccupied as well as produce mana at the beginning of its controller’s turn. Combat is essentially very simple as it functions roughly the same as most physical board games: If your piece can move into an enemy occupied tile, you eliminate the opposing piece and take the tile. Units all have different mobility (number of spaces they can move in a turn), so the flow of the game tends to shift back and forth depending upon which player is able to best utilize their mana to eliminate a higher cost unit of the opponent’s control, since moving onto a tile is generally the same as killing the unit occupying it.

The four different units in the game are what make playing A Druid’s Duel interesting, as each of them have a base state and an animal transformation with different properties. The player has access to Guardians, Wind Riders, Snarlclaws and Waywalkers, which each have an animal state of wolf, eagle, bear and turtle, respectively. The Guardian can move to or attack one adjacent space, while the wolf can move up to four spaces but can’t attack once transformed. The Wind Rider, on the other hand, can’t attack adjacent spaces, making them easy prey for opposing Guardians, but their eagle state can move and attack up to 6 tiles away, perfect for taking out valuable units that would be out of other units’ reach. The Snarlclaws can destroy obstacles and move up to two spaces or attack once, or attack three times in a row in its bear state, making it easy to rip through a blockade of Guardians like a starving man through the last sub sandwich in the land. The last unit, the Waywalker, is the most entertaining as they get three actions per turn and can’t attack adjacent spaces, but they can create and delete land spaces, the deletion of which effectively removes the unit occupying it, create obstacles to inhibit enemy movement or destroy them to let your own forces through, and even steal enemy controlled tiles from a distance.

Any unit a player controls can capture land tiles, which as mentioned previously will add mana to the controller’s pool at the start of their next turn as well as become spawn points for new units. The game is not won until each land tile controlled by enemy forces is eliminated, making it a very good decision to steal land back from the opponents at practically every opportunity available, since they’ll have less mana and fewer spaces on which to generate new units. There are fairies that can be nabbed up by either side that will instantly generate some mana, as well as relics that provide a hearty boost to the controller’s mana supply, but in general, mana will be obtained from lands during the back-and-forth struggle of each game. A Druid’s Duel is all about map control, as balking enemy movement by any means necessary, including sacrificing your own units, is incredibly important.

As far as the story mode goes, there are six campaign chapters in A Druid’s Duel, each of which have about as much plot as a popular Twilight fanfiction, since the story is mostly superfluous, the characters are two-dimensional and it doesn’t even touch on the fact that the player is a heartless monster that will spend the lives of at least four Guardians trying to kill a single awkwardly placed Waywalker in the opponent’s control. The general point is, the story is superfluous exposition and largely just a few sentence excuse before the game lets you get right back to the strategic goodness that is A Druid’s Duel, which is about the norm for the genre. The campaign, barring the story, is fantastic since there six chapters (called seasons) each coupled with branching paths throughout to the finish, so multiple playthroughs can widely vary your experiences. There are also four distinct difficulties, allowing the players to more easily tailor the game to a comfortable level, which is always an appreciated feature.

The graphics in A Druid’s Duel are nothing technically impressive: There is no bloom lighting or PhysX here, though neither of those would apply to this game much at all. Instead, A Druid’s Duel is drawn in a very competent and delightful art style, with the designs being crisp and distinct, all around. Players should never have difficulty trying to discern something in this game, at least.

The music is a little less than stellar in numbers, however, as there’s only one track per season/chapter outside of chapters with bosses in them. While the music itself is extremely fitting and well composed, it is kind of saddening that there isn’t a little more variance, overall. The sound effects fit perfectly for most actions however. The most important aspect of A Druid’s Duel is how the different units each can affect the topography in different ways, thus requiring players to reevaluate their strategies every turn. Waywalkers can quickly and heavily shift a game in its controller’s favor by removing or adding land spaces multiple times a turn, though even so much as an unanswered wolf stealing multiple tiles by squeezing past enemy Guardians can pave a player’s way to victory. The focus on capturing tiles and formulating a territory, rather than routing the enemy, is a pretty interesting concept and, most of all, is quite fun. While the AI can be disappointing at times, the good news is that there is also local and online multiplayer for those who wish to use wolves to mark their territory against another player.

Overall, A Druid’s Duel is quite a lot of content for its price, which at time of this writing is $7.99. Players have access to over a hundred levels across multiple playthroughs thanks to the branching campaign, online and local multiplayer also lend well to the game’s replayability at its low price point. While the focus of the gameplay is somewhat different and may have a learning curve for those unfamiliar with strategy games, the difficulty isn’t so high that it is unforgiving or inaccessible (unless you set it to the highest difficulty, Elder, which you probably shouldn’t do if unfamiliar with strategy games).

Of course, the absolute best part about A Druid’s Duel is that thanks to its absence of mischief, your undergarments will stay right where they are, and that’s really what is most important. This game would easily be recommended as a nice distraction to those who enjoy Aerena, Space Hulk: Ascension, or even games such as Civilization. Those who are fans of real time strategy games may not find enough to love, here, though, and would be better suited to try a different title.