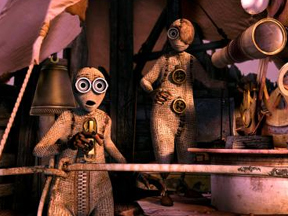 When I finally jumped and got a PS3 Slim, one of the coolest features was that it was also a Blu-ray player. But after many hours of playing Borderlands and Ghostbusters, I found that I still hadn’t used that part of it.

So when a review copy of the Tim Burton and Timur Bekmambetov movie 9 showed up, I figured there was no time like the present.

GiN does not normally review movies but we figured we could make an exception for 9. The animated world the movie takes place in is very much like a video game, and a lot of people have Blu-ray now that PS3 Slims are finally reasonably priced enough for it to earn an install base.

The movie begins where humanity ends. In fact, humans play a relatively small part in the movie, having been killed off before it begins. How they die is pretty much standard fare for movies. They create a race of thinking robots to help them fight some enemy. And the robots inevitably turn on them Battlestar Galactica style. At least in the country where the real stars of the movie live, every human has been killed.

The movie follows a tiny little doll-like creature that looks like the directors ripped the sock puppet right out of Little Big Planet. In fact, the creatures in the movie have the same default texture as Little Big Planet’s denizens to the point where one wonders if the director and animators are huge fans of that game. I mean they are the spitting image of the Little Big Planet folks.

The main character is a puppet-person with a big 9 painted on his back. At first we think he is alone, but he soon finds others. The puppets are lead by number one, a pope-like character with a mitre and staff. We soon learn that number one’s plan involves hiding in an old church until the last of the robots die off. But not every numbered puppet agrees with that course of action, so some of the numbers from 1 to 9 are missing.

Nine quickly decides to go against number One and try to rescue a fellow puppet that has been taken by a cat-like robot that has been terrorizing the landscape and the puppets. It seems to be the last of the killer robots left alive in the wasteland.

Here is where I think the movie took a wrong turn. The puppet is rescued and the cat-robot killed, which means the puppet’s problems are over, right? Wrong. Because the cat was trying to plug in a power source into the wall when it was killed. Now, if your sworn enemy is trying to do something, then it’s probably bad, right? Well for some reason 9 decides to finish the cat’s work and plugs in the power. This starts up the uber-killing robot that ran the army before, and it spells doom for several of the puppets.

The rest of the movie is spent battling the big robot factory and all the robots that the newly awakened main one creates. The stupid thing is that there was no reason for 9 to plug in the big robot, so from that point on the whole movie is kind of a waste of time plot-wise for me. I just could not get over why all that badness had to happen at all. At the end we learn that the dead puppets might be able to be saved, but what happens is not really what I would call saving. I’m just not sure why the plot was so forced or why there had to be a sad overtone to what could have been a happy ending. I think Tim Burton is incapable of producing a movie with a truly happy ending, and his brooding style lauds over what could have been a real treat. The movie could have been like a thinking-man’s Toy Story. Instead it’s more of a depressed man’s WALL-E. At least we learn why the puppets were created and numbered one through nine, but again, the reasoning there doesn’t make a whole lot of sense.

Plot points aside, the movie does look fantastic. Especially on Blu-ray, the world looks amazing, sort of a destroyed World War II town with some futuristic elements. There are even dead humans lying around in places to give it a creepier feel. And some of the monsters are really gross, even if they are animated. Take The Nightmare Before Christmas characters and increase their weirdness and creepiness by a factor of ten and you have an idea of what you will face.

In terms of sound, everything is great. There is no shortage of star power. Actors Elijah Wood, Jennifer Connelly, Crispin Glover, Christopher Plummer and Martin Landau really bring the characters to life.

On the Blu-ray, you get some extras including the original 11-minute short that was the basis for the movie. Director Shane Acker explains why he choose the style and colors that he did and the animators even talk about how they got into their characters.

A neat feature on the Blu-ray version of the movie is the ability to watch the film without special features enabled, but with the ability to add them in as you wish. What happens is that a symbol will alert you that a special feature is available, and a quick tap of the PS3 controller (or Blu-ray remote) will let you access it if you want. The movie can also be played as normal, which is exactly like it was shown in the theater. There is also an online component that lets you download other features, though this is mostly trailers for other movies you might want to see.

In terms of a movie, 9 is pretty good but far from great. As an example of what Blu-ray can do, it’s pretty amazing. If you picked up a PS3 and want to see what your new system can do, give 9 a try. Just don’t let the kiddies see it. This movie is for adults only, unless you want your little ones plagued with nightmares.