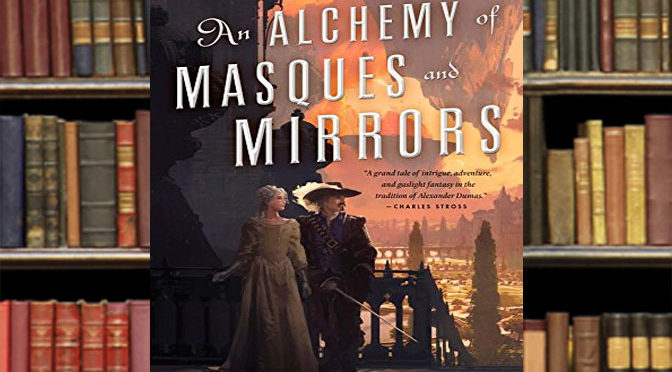 An Alchemy of Masques and Mirrors

Hey all I’m back with Steampunk book from the good folks at Tor! It’s An Alchemy of Masques and Mirrors by Curtis Craddock!

Plot Synopsis: In a world of soaring continents and bottomless skies, where a burgeoning new science lifts skyships into the cloud-strewn heights, and ancient blood-borne sorceries cling to a fading glory, Princess Isabelle des Zephyrs is about to be married to a man she has barely heard of, the second son of a dying king in an empire collapsing into civil war. Born without the sorcery that is her birthright but with a perspicacious intellect, Isabelle believes her marriage will stave off disastrous conflict and bring her opportunity and influence. 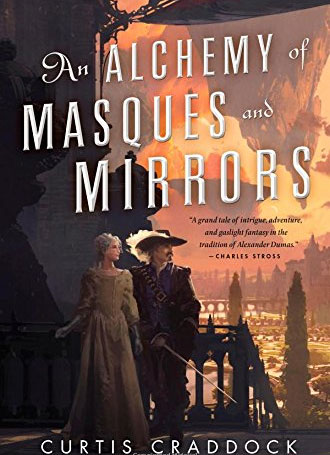 Plot: This book starts off with a pretty horrific scene, and if you get queasy easily just from reading something this is probably not the book for you. That being said it’s a pretty interesting book because it’s heroine is a disabled person who using her own intellect has overcome her difficulties. I won’t say it’s the best book I’ve ever read, but I do have to agree with my favorite author in that it is “A great read.”

[amazon asin=0765389592&text=Pick up this great read for yourselves with a copy of An Alchemy of Masques and Mirrors from Amazon!]

Characters: Isabelle is a pretty interesting young woman, who while physically disabled users her own intelligence to get over her disabilities. And despite not having the power of her own bloodline and earning the scorn of others for both problems, she still persists in not giving up in either life or her own dreams. Jean-Claude the other major character is also very interesting, in that he’s a pretty righteous guy who strictly follows his own code of honor, even if he feels disgust for having to do so sometimes. The rest of the cast is pretty interesting, but Isabelle really does steal the show with her persistence in striving to find a place in the world.

Overall: This is an excellent book, but there are some gruesome and horrific scenes that may upset those with delicate stomachs. If that won’t impact you though, it will be an excellent Steampunk book and start to what is looking to be a great series.

For those who like: Steampunk, Action, Adventure, Drama, Politics, Excellent Plot, Fantastic Cast of Characters.