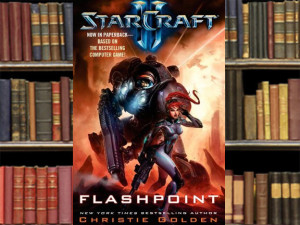 Christie Golden’s sci-fi novel Starcraft II: Flashpoint is the portrayal of a man in love with a woman; a woman who became a monster. In this space opera the man is Jim Raynor a leader of a rebel band aptly titled “Raynor’s Raiders.” The woman is Sarah Kerrigan, a telepathic, telekinetic assassin who becomes Raynor’s love but is then transformed into a world conquering human/alien hybrid called the “Queen of Blades.”

The novel concerns itself with how Raynor, who rescues Kerrigan from her alien programming, attempts to reawaken her humanity. It is “Beauty and the Beast” with the twist that Beauty became a Beast and the man is the one trying to tame the creature with love. The problem with this Beast is that she becomes the host of a hive mind that overwhelms her better nature and forces her to be their leader.

Kerrigan did not get this way by accident. Arcturus Mengsk, a self declared Emperor, had lots to do with it. Arcturus broke off from a decaying and Intergalactic federation called “The Confederacy” and gathered those around him who felt wronged by it. He manipulated Kerrigan, using her as his psychic assassin, before the events in the book.

This back-story informs much of the book. Arcturus had utilized the services of lawman Ramsey, his rogue friend Tychus Findlay and many disenchanted citizens of the corrupt and ineffectual “Confederacy.” This was made easy since the tyrannical Confederacy couldn’t seem to defeat a dangerous invasion of the alien Zerg.

Arcturus christened this functioning offshoot the “Terran Dominion” as a military autocracy with him as the self-crowned king. Once placed in charge he changed from benevolent dictator to Machiavellian monarch. He utilized the Zerg to finish off the Confederacy for him, sending Kerrigan in the middle of a three-way battle to ensure the success of his scheme. Starcraft players will recognize that three-way battle from the game. Arcturus later abandoned Kerrigan to the Zerg swarm in that same battle.

Raynor did what he could, going against Arcturus and attempting to save Kerrigan, but couldn’t. His failure haunts him in the book and it traumatized Kerrigan. It also gave the Zerg a leader that helped them slaughter whole worlds. Kerrigan as “Queen of the Blades” became a conduit for Zerg ambition and hunger to conquer. The irony that Arcturus created the “Queen of the Blades” and fathered a son that rebels against him is a great conflict from the video game that author Christie Golden exploits to great effect.

After Kerrigan’s transformation into a weaponized warrior queen, Arcturus enlisted the aid of Ramsey’s friend, Tychus Findlay, to kill her. But during this cross and double-crossing Arcturas’ son Valerian arrives and offers them both a deal. His scientists will work to fully restore Kerrigan’s humanity if he can study how she lost it.

Valerian may be the second most conflicted character in the book. The son of a ruthless emperor, he comes across as one whose moral code is that of noblesse oblige. This duty to do well by his subjects puts him at odds with his father, making him a rebel prince. It’s also unwelcome to Ramsey and Kerrigan who were betrayed by his father and disenchanted by his “Terran Dominion” the very revolutionary government they helped found. Ramsey’s Raiders and Kerrigan have a hard time trusting their new ally. The friction to make their “enemy’s enemy” a combined fighting force with their more anarchist faction is an interesting subplot.

This space opera with a fairy tale twist makes for a quick read. If you are a Starcraft gamer who wants more Ramsey and Kerrigan you should read this book. If you are a sci-fi fan, who likes anything with alien invasions or fiction that asks, “what is human” it is also worth the time to check out.