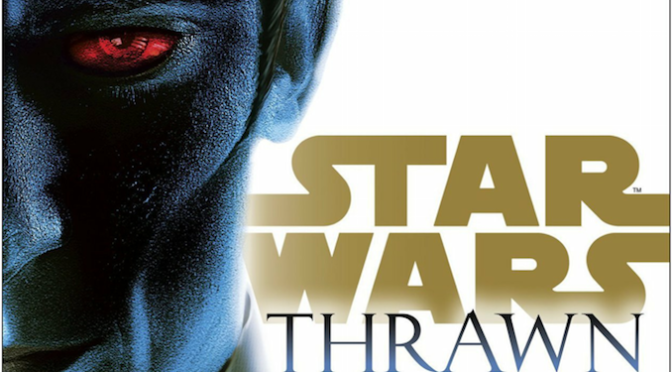 The story begins when an exile from the Chiss Ascendency, Mitth’raw’nuruodo, known by his core name Thrawn, uses his ingenuity to escape when Imperial troops arrive looking for smugglers. Finding himself aboard the Imperial Star Destroyer Strikefast, Thrawn turns himself over to Captain Parck. Since outsmarting his men Parck becomes intrigued by this blue skinned alien with glowing red eyes and welcomes him as a guest as they head back to Coruscant. Arriving on Coruscant a meeting with Emperor Palpatine changes the future for both the former Chiss officer and a Cadet named Eli Vanto. Cadet Vanto has at this moment been reassigned as Thrawn’s interpreter. Eli also heard of the Chiss, which intrigued Thrawn. At this point we come to understand that Thrawn is more than a cunning alien to the Imperials and is destined to play a major role in combating insurgencies and smuggling operations.

Though the title of the book is Thrawn we are introduced to a new character, Eli Vanto. Before the arrival of Thrawn, Cadet Vanto was on his way to becoming a supply officer. After graduation Eli was assigned as now Lieutenant Thrawn’s aide and would be at his side throughout his career.  However the book is not solely based on the adventures in the Imperial Navy with Thrawn and Eli but also the story of Arihnda Pryce. She went from working at her family’s mining business to governor of Lothal with what seemed almost career ending twists and turns along the way. On her road to power Pryce becomes entangled into the affairs of Thrawn, as he happens to need the political skills that Pryce offers. Especially when it comes to dealing with internal political and military affairs. 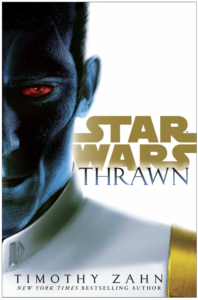 Thrawn in this book is portrayed as a skilled military tactician. His methods are unorthodox which puts him in constant conflicts with his superiors. However, he does gain valuable allies in both the Imperial Navy and amongst the political elite. Not only is he an alien in a very Human-centric Empire but he gains victories when other commanding officers fail. These victories come at the cost of fighting a particular enemy, Nightswan. He becomes Thrawn’s quarry throughout the book leading to an eventual showdown with the larger insurgency. There is also the matter of the metal Doonium that piques Thrawn’s interest and plays a part in the Pryce story.

Throughout the book we gain a better look at the character of Thrawn. He was a former officer in the Chiss Ascendency and therefore already had enough of a military background to only need training in Imperial Navy protocols and tactics. Thrawn also has a unique ability to learn about his enemy through studying their art. Not only art but we also see how the Chiss biology, which is not very well-known, plays a role in Thrawn’s ability to read people. Timothy Zahn does an excellent job of writing about how he comes to his conclusions and explains his maneuvers in battle. In the book even Eli begins to understand Thrawn’s tactics, which helps when reassuring the other commanders. However, other officers question Thrawn’s maneuvers and even his non-aggression toward opponents. Thrawn waits out his enemy, learns their moves, and strikes accordingly when all facts are known. It’s why he is a military genius and gets rewarded while others are left behind.

Politics also play a huge role in this book and its portrayed well with the character of Arihnda Pryce. She is someone who plays the system to gain power in order to benefit her and her family while manipulating others including Thrawn either into a position of power or to destroy them. No one is innocent in this book and all have some motive to why they are doing what they do.

One thing this book does is show the Imperial viewpoint, following the stories of citizens of the Empire or newly made citizens of the Empire. We get to see what life is like on Coruscant during Palpatine’s reign and life inside the Imperial Navy and Academy. Also readers learn of the cruel nature of Imperial politics and the depths people go to gain or keep power and prestige.

I have to mention that Thrawn is not only a genius in military tactics but he has a way of manipulating people to see things his way or altering careers. When he speaks with the Emperor though only briefly it’s what he says and the way he presents himself that gets him into the Imperial Navy and has the Emperor to agree to keep his people safe. Its moments like this that make people say, “What just happened?” He is a smooth and calm tactical genius that can’t quite maneuver in politics.  Either that or everyone else including the Emperor are that easily swayed.

One of the best aspects of the book is the depth of character development. The main characters Thrawn, Eli Vanto, and Arihnda Pryce have many different changes in their characters throughout the book. Thrawn does seem to be the same character, except for rank and responsibility,  throughout but he adapts to new conditions and must navigate the Imperial Navy and politics of the Empire. Of the three Eli and Arihnda change the most. Arihnda goes from a dutiful senator aide to repositioning herself in galactic politics.

Then there is Eli. After a while I wondered if the book is about Thrawn or Eli Vanto. Before even meeting Thrawn we get to know Cadet Vanto. Because of his upbringing he was able to understand Sy Bisti and work with Thrawn to get information from him. He helped Thrawn learn about the Empire, taught him Basic, and was there to give him advice on how to survive the Imperial Academy. To benefit Thrawn’s career he was manipulated  to stay at Thrawn’s side as his aide and confident. Timothy Zahn does a great job writing these characters that the audience can connect with and engage with. Even the other supporting characters are dynamic and are used to move the story along.

As a well-developed story Thrawn will keep readers engaged with Imperial politics, military strikes and encounters, following Thrawn’s engagements with Nightswan, and the fight against the insurgency. We get a background story to Thrawn up to the events of Star Wars Rebels including his relationship with Governor Pryce. We also learn why Lothal is important and the reason Thrawn is called into fight the rebels there. In the book there is also the matter of who is Thrawn, is he really what we see in the animated series or is he someone else.

My question when I began reading this book was how would Timothy Zahn bring back his famous character into the new timeline. He did it in a way that kept him essentially the same as his character from Legends but in a new timeline. Thrawn is still the same tactical genius, uses art to understand his enemies, and has the cool confidence of an experienced Chiss officer. As for making conclusions, Zahn does a fantastic job relaying to readers Thrawn’s thoughts and what is going through his head when he calculates his moves or reads another person to make a decision.

When it comes to timeline the book explains where the story falls in the Galactic Empire era ending at the beginning of Star Wars Rebels. It also covers the life and history of the rule of Emperor Palpatine. We get to see what life was really like during that time for citizens of the Empire and reasons why some opposed the Empire. I found having a story about life in the Imperial Military and also life as a politician during the Empire was fascinating and gave me a new perspective to the Star Wars story.

With all these new revelations, character development, Thrawn’s background, and the story of the Empire’s fight against the fledgling Rebellion the book Thrawn by Timothy Zahn is one of the best Star Wars books I have read from the new canon.  A great story to learn about one of Star Wars greatest military tacticians, who is either a villain or hero depending on side.