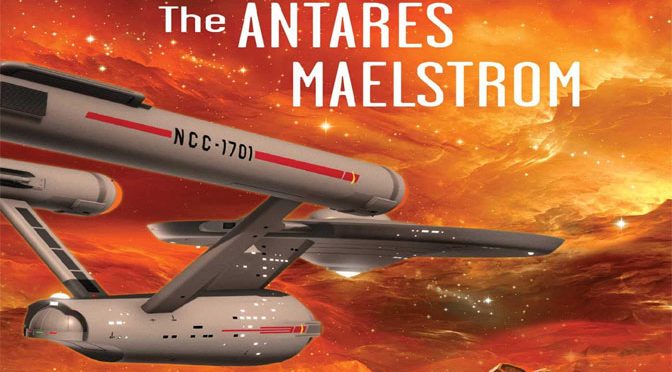 Part western, part mystery, part action-adventure, Greg Cox’s Star Trek: The Original Series: The Antares Maelstrom is a wild ride. The book opens with the discovery of huge deposits of a rare energy source on a small backwater planet, Baldur III, that isn’t even in the Federation. A rush of people flood the region hoping to strike it rich in mining. Unfortunately, the planet doesn’t have the infrastructure to manage all the incoming miners.

The nearest Federation space station, DS8, is overwhelmed and another nearby world, which is pre-warp, is also threatened because they grow a tea that makes breathing the thin atmosphere of Baldur III easier for people unaccustomed to it. To make things more difficult, the shortest way to get to Baldur III from DS8 is through the Antares Maelstrom, but it’s deadly and impassable, which doesn’t stop unscrupulous folks trying to make a buck from selling phony maps through it. The Enterprise, under Captain Kirk, is called in to assist the Baldur III government as well as backup the Federation officers on DS8. 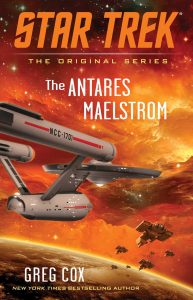 Sulu gets dropped off with a security detachment on DS8 where he has to try and control the unruly would-be miners while also trying to figure out who is sabotaging the station. Spock and Chekov are dispatched to the pre-warp planet to meet with Federation sociologists who are embedded on the planet and studying their culture. Someone from off-world is breaking the Prime Directive and buying tea from the locals. Finally, Kirk and the rest of the crew head to Baldur III where Scotty must try and sort out the local power situation before the capital city blows up. It’s a wild ride for everyone involved.

[amazon asin=1982113200&text=Set a course for teh The Antares Maelstrom with a copy of this fast paced Star Wars book from Amazon!]

Each of the plotlines is well written and fast paced, but part of the reason, I read Star Trek novels is to see the interplay of the beloved characters as they deal with a crisis, but in this book almost all the characters are acting separately with various locals. I found myself missing that interaction.

The Antares Maelstrom is a quick read and has an abundance of action and twists and turns, which makes the separation of characters more frustrating. Generally, when a Star Trek book isolates a character it’s an opportunity for the author to do a deeper study and show us more about that character’s personal life. Cox doesn’t do that because there is no time for it in the pace of the book. That said, I still enjoyed it and I suspect anyone who likes Star Trek will.

Check out The Antares Maelstrom and let us all know what you think.