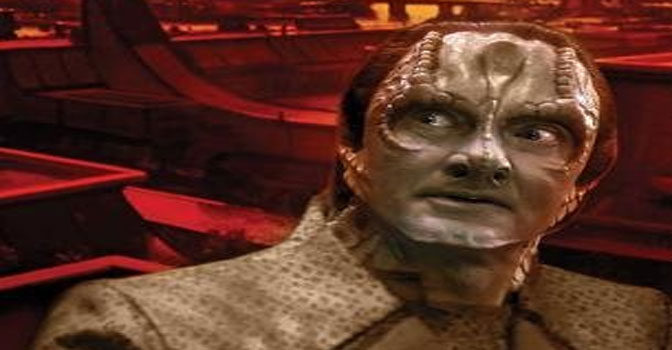 In the Star Trek universe, what type of mystery story ends with everyone being guilty? The answer is a Cardassian Enigma Tale. This is the perfect title for Una McCormack’s Star Trek novel, set in the Deep Space Nine universe.

The main character for this novel is Elim Garak, the mysterious, manipulative and charming tailor/spy of the TV Show Deep Space Nine and his foil/friend Doctor Julian Bashir. In the story Cardassia is now a fledgling democracy trying to change from its cruel authoritarian past. In the book it draws literal parallels to Germany after World War II, where a country with a horrible past tries to make a bright future. 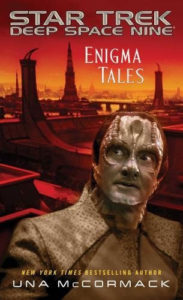 Garak is the head elected official of Cardassia, turning his past as a leader of the secret police (the Obsidian Order) into a positive. If this seems too Sci-Fi farfetched don’t we have a former KGB agent now as the head of Russia? Doctor Bashir in this novel is addressed in a series of letters by Garak, which are never sent. This makes sense later but it sets up a mystery that is intriguing.

These letters are some of the novel’s best writing. Garak writes to Bashir about a trip he made to Earth. In it he relates Earths past to Cardassia’s present struggles in a moving passage, “In Berlin, I saw a city that had redeemed itself. I walked through a district that had one point been the administrative center of a vile regime…I loved Paris, but I knew Berlin. I pass through a city like that everyday.”

On the TV show Deep Space Nine, in the episode “Distant Voices,”[amazon asin=1501152580&text=Dive into some Star Trek Spycraft with Enigma Tales from Amazon]

Doctor Bashir is having a birthday and Garak gives him a copy of some Cardassian Enigma Tales. Bashir says he doesn’t like them because in the end everyone is guilty. Garak says to him the challenge is figuring out who is guilty of what.

Many of the characters in this novel are guilty of something and given Cardassia’s past it makes perfect sense. Doctor Peter Aldin, a former Star Fleet intelligence officer and the Cardassian scholar Natima Lang are two such characters which struggle with their past. The first seems to try and rationalize his murderous history while the second feels terrible over her smallest failures.

This book must work within the post TV show Universe so it builds on past novels with Garak and Bashir while introducing new characters as it advances Star Trek history. McCormack handles all these tasks, especially the first one. Since Garak is one of the most complex and popular DS 9 characters this should be lauded.

A good deal of acknowledgment for this book should also go to the actor who portrayed Garak, Andrew Robinson. Robinson wrote a novel about his character, the first Star Trek actor ever to do so without the aid of a ghostwriter. This novel forms the basis for Garak’s position on the newly democratic Cardassia.