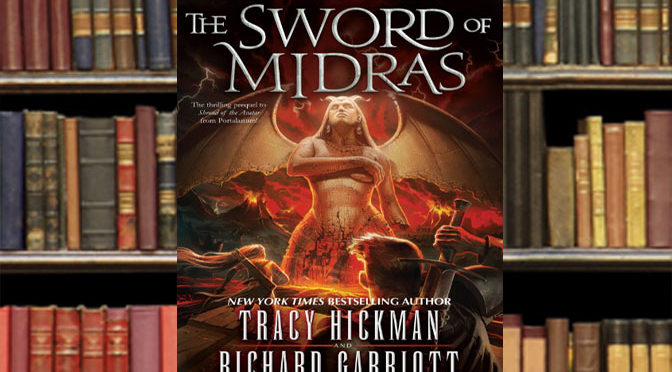 The Sword of Midras

Hey all. I’m back with a book that ties into the upcoming game Shroud of the Avatar! It’s The Sword of Midras by Tracy Hickman and Richard Garriot!

Plot Synopsis: The world died during The Fall. Abandoned by the mighty Avatars and their Virtues, the people who remained were left defenseless in an untamed land. That is, until the Obsidians came. Through dark sorcery and overwhelming force, the Obsidian Empire brought order to chaos, no matter the cost. 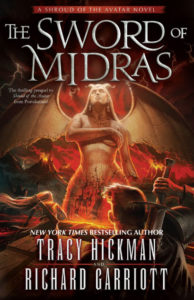 Aren Bennis is a Captain in the Obsidian Army who has seen enough of what a world without Virtue looks like and is willing to do whatever it takes to establish a lasting peace. But after finding a magical sword that only he can wield, a sword his trusted scout, Syenna, claims is a blade once used by the legendary Avatars, Aren is thrown into a far more unfamiliar battle. One fought with whispered words and betrayal instead of swords and arrows.

Plot: I can’t say I really enjoyed the book. I’ve had enough of endless political backstabbing and literal backstabbing in my reading recently, and Sword of Midras doesn’t even make it very interesting. I’m sure some Ultima Online fans will call me a heretic, but I truly didn’t find the book that interesting. Maybe the sequels will prove better, but I just did not enjoy Sword all that much. But given that this is a tie in to a game that isn’t even out yet, I’m not too surprised at it lacking depth.

Characters: It might be because Aren and Syenna are some of the least interesting characters I’ve read in a while, although I can’t decide if the cast of Wolf’s Empire or this were more snore-inducing.

Overall: Unless you are really interested in Richard Garriot and his work, or the upcoming Shroud of Avatar game, you should skip Sword of Midras.

For those who like: Politics, Betrayal, Action, Adventure, Video Game Tie-ins, Richard Garriot.