Hey all I’m back with the latest entry in one of my favorite series for my book review this week! It’s Rogues, Book 10 in the Demon Accord series, by John Conroe!

Plot Synopsis: When a hunter is brutally mauled in northern Maine, it’s presumed that a black bear is the killer. But an astute local deputy suspects a more supernatural element. His call for assistance is answered by the supernatural community sending one of their very best. If it takes a thief to catch a thief, who do you use to catch a werewolf? But nothing is ever simple in the preternatural world. There’s more here than meets the eye…nose…ear…or fang. 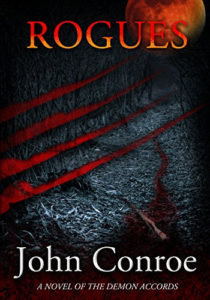 Plot: This isn’t a Chris and Tanya novel. It’s also a departure from the usual first person perspective in pretty much all of the series except Executable. That isn’t to say I found this entry bad, in fact that’s probably the furthest thing from the truth. I loved this entry because it resolves one of my biggest problems with the series thus far and that’s how Stacia Reynolds, our most prominent Werewolf character in the series, was treated. She always had a huge thing for Chris, but there’s never been any romantic thoughts reciprocated from him.

Dive into Rogues, Book 10 in the Demon Accord Series by John Conroe with a copy from Amazon

In fact Stacia has always been treated as a lesser character by the vampires and it’s only been since the previous entry, God Hammer, that she’s gotten her redemption in the form of Declan. This is definitely Declan and Stacia’s novel and while some might argue that this entry might have been better as a .5 novel instead of a full numbered entry in the series I don’t agree. Declan and Stacia becoming equals in plot importance with Chris and Tanya will only make the series better in the long run in my opinion. There are plot reasons for why Chris and Tanya are on the sidelines in this entry unlike all the previous entries. So if you want to break down everything I just said above, it’s that Rogues is an excellent entry and while it doesn’t feature Chris or Tanya, with Declan and Stacia taking their place, in this book. It isn’t a fault, but a boon to the series and this entry.

Characters: Like I mentioned above Declan and Stacia are the two stars of this entry, a major departure from the majority of the series, although Declan in particular has been getting lots of screen time in the last couple entries. Of the new characters I like Buck and Shorty the most, although there are some other characters I enjoyed as well. We even get to see a couple old familiar faces, including one in particular we haven’t seen in quite a few books.

Overall: While a departure from the usual cast of characters, Rogues is decidedly a Demon Accord novel and lives up to it’s predecessors by highlighting Declan and Stacia.

For those who like: Urban Fantasy, The Demon Accord Series, Action, Drama, Romance, Excellent Cast of Characters, Fantastic Plot.