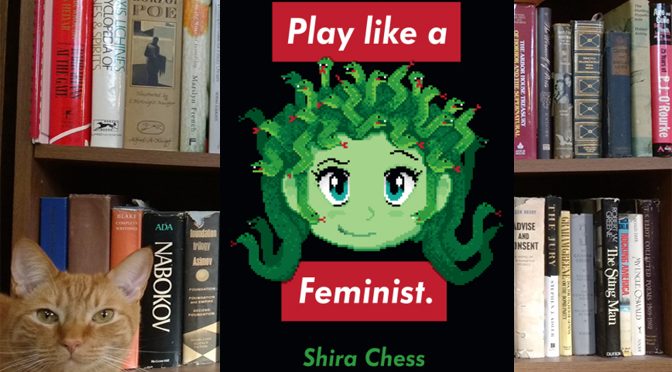 Only rarely do scholarly works cross our desks at Game Industry News, so imagine my surprise when Play Like a Feminist arrived for review. Had it been a weightier tome, I probably would have skipped it, having experienced enough of scholarly writing in graduate school. However, given that it’s a reasonable 164 pages, 30 pages of which are an appendix and index, I decided to give it a go, and I’m so glad I did.

Shira Chess has a delightfully readable style, so rare in scholarly work, so that the book is completely engaging. Play Like a Feminist uses research, both data driven and experiential, to discuss the role of women in video games primarily as end users, but also touches on developers. Like anyone who knows about video games, Chess is aware that women play a lot of games, but rarely identify as ‘gamers.’ I do, but I’m special.

The book touches on some of the uglier aspects of what women have to face particularly in online game spaces, but mostly it’s a call to play. She makes a very good argument that women don’t engage in enough leisure time, and when they do, they often make it production driven, such as crafting. Because women’s leisure has been tied to production, many women are uncomfortable with the idea of engaging in play for the sake of play, but Chess argues, and I agree, that the kind of free play described is essential for relaxing, mental health, growth, and exploration. It doesn’t have to be video games, of course, but they are one type of play that women would benefit from engaging in. 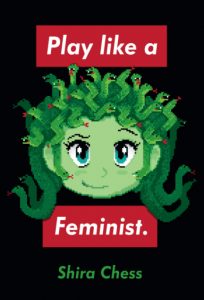 After making her arguments, Chess has suggestions for how to make that happen. She suggests gaming circles, and in the appendix, goes so far as to offer a template for forming one and even suggests some games to get started. These beginner games to draw women in to play are generally point-and-click discovery games, puzzle games and matching games and many are on mobile platforms. I appreciate why she chose those games to get started. They are inexpensive, don’t require a console, and can be played for short bursts anywhere, like in the car waiting in line for school pick up.

My only quibble with Chess is that I wish she’d devoted a few pages to those of us women who do identify as gamers and how hard we’ve worked to have our voices heard in big video games. It would have been nice if she would have discussed inclusive games that were big hits on consoles and PC. Female gamers have clamored long and hard to get character options that include women, people of color, LGBTQ options, and some big game companies have really responded to that and produced some big games that made big bucks that addressed those issues, so it would have been nice to see a nod to that. Unfortunately, the only times bigger games were really mentioned, it was in regard to online gaming and issues like GamerGate, which was awful and absolutely needed to be addressed, but there have been some strides made as well, and it would have been nice to see those called out. It could be better, to be sure, but it’s not all bad.

Because Chess left out games like Skyrim and Mass Effect and Horizon Zero Dawn, she made it seem like feminist gamers never want to shoot digital people in the face, and I assure you, that’s just not true. Some days shooting a digital jerk in the face is incredibly therapeutic, which isn’t to say I didn’t also love What Remains of Edith Finch and other games like it, because they are also really enjoyable, but in a different way. I guess, I just wanted those of us women who do see ourselves as gamers to also be seen by Chess, because she wrote a very accessible, scholarly work on a subject near and dear to my heart.

In short, Play Like a Feminist is a very good book. Her suggestions, like many suggestions of inclusivity, would make anyone’s life better. Regardless of your gender identity, play is good for you at any age, and most of us don’t engage in it nearly enough and often feel guilty when we do. Stop that. Go play a game. Free your mind and your heart for a little fun exploration and see what you find to enjoy. It’s been a rough winter; you deserve a little playtime. Read Play Like a Feminist for more suggestions and a deeper understanding of why it’s important to play.