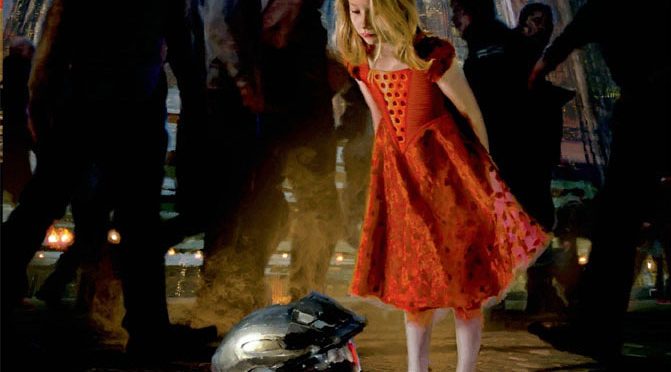 Mortal Dictata is one of the best Halo novels I have read. The reason? It confronts what happens when Naomi, one of the colonial children who were kidnapped to create the super-soldier Spartan-II program, gets to meet her father Staffan after more than thirty years. What complicates the matter is that quietly stubborn Staffan did not fall for the elaborate ruse the Office of Naval Intelligence (ONI) conducted with the kidnapped children. He knew Naomi did not die, but was instead replaced by a short-lived clone.

Staffan dedicated his life to working on an underground resistance to the United Nations Space Command (UNSC), the intergalactic military government that makes up the backbone of the Halo game. Naomi, being an ONI agent, happens upon him when they find his underground arms buying escalated to purchasing a missing alien Covenant warship called the Pious Inquisitor. Two alien races (both the Covenant and the Kig-Yar) and the UNSC’s secret agency ONI are seeking the Pious Inquisitor since it can destroy whole cities.

Staffan wants this Covenant city slaying ship as a way to hold Earth hostage so it will give up the information on what happened to his and all the other colonial children who were kidnapped. It’s ironic that it’s the daughter he seeks, that is the agent working to stop him. A touchstone for both of them is a dollhouse Staffan was going to make for Naomi but never did.

This brings the HALO game full circle. The megalomaniac scientist Catherine Elizabeth Halsey originally created the Spartan-II program to fight in the Insurrection between Colonists and the Earth based UNSC. She called them Spartans because the goal was to kidnap 300 children, after the 300 ancient Spartans that died at Thermopile, and raise them to be the ultimate warriors like their namesake.

This Spartan-II program ties in well with the military type government that seems to run everything in the HALO universe. Yet the author, Karen Traviss, makes not just the rebelling colonists question Halsey’s program of kidnapping and indoctrination, but also some of the super-soldiers.

This science fiction history has elements of real history. The Ottoman Empire created the loyal Janissary soldiers by taking their subject peoples’ strongest sons and raising them as Muslims loyal to the Sultan. Janissaries were taken from their families between the ages of six and 14, subjected to harsh discipline, forbidden to marry and trained to only be soldiers.

Karen Traviss, lead writer for the Gears of War 3 game along with her HALO novels and comics, often puts soldiers in the middle of such moral quandaries. A former United Kingdom military reservist and defense correspondent, she knows military people well. She balances the strong sense of duty all good soldiers have with the occasional questioning and internal debates that go along with warfare. Her original science fiction series Wess’har Wars also put these themes front and center.

This is what makes the character Staffan so interesting. Unlike the heroes who question, but never confront the methods of destruction they engage in, Staffan takes on the whole Halo universe for his family. Since much of the game involves the UNSC confronting alien menaces, the civil war that started the military government is never really scrutinized. In the games, the Spartan program is seen as the few suffering for the greater good of mankind and Catherine Halsey is a tortured soul who loves her captured children, children who grow up to defend her in the game.

Staffan, a meticulous craftsman and factory worker, takes his handy talents and his patience to become an effective member of the colonial resistance. He single-mindedly creates a network of arms dealing and sophisticated weapons modification as a way to create a Colonial military force. When he comes across the warship he throws aside his regular caution so as to capture it for his driving passion, to find out the truth about his daughter.

Traviss mirrors father and daughter in both their efforts as they finally meet and even join efforts to stop the ship from going over to the birdlike alien Kig-Yar. The Kig-Yar, who eschew empire building, unlike the humans they are contrasted with, make an interesting side plot. These mercenary aliens who acted as privateers with letters of marquee from the Covenant now are living with the human colonists in a post war partnership of commerce.

Some of them are selling the ship to Staffan and the rebels while others want to recapture it. This small mercantile skirmish mirrors the larger conflict between humanities militaristic UNSC and the colonists. The colonists defend the small family unit and little “d” democracy over the large empire that stole their children. Staffan’s example finally wins over the ONI artificial intelligence BB and the Russian counter-insurgent Vaz.

If you are a Halo fan, a science fiction fan, or even a fan of military stories, check out Halo: Mortal Dictata. It’s worth a read.