Barbarian hero, Jendara, returns in Starspawn to explore an island that suddenly arose from the sea with cataclysmic results. The island’s emergence caused a tsunami to ravage the surrounding shores, including Jendara’s home. But the island brought more than a giant wave; it carries a sleeping Lovecraftian-horror from an alien realm.

Jendara wields a sword in one hand and a hand axe in the other with the effectiveness of Red Sonja. Set in the Pathfinder world of Golarion she deals with an adventurous son, her second husband Vorrin (the first husband, her son’s father, died) and her pirate past. Unlike most fantasy heroes she is not on a quest to the edge of existence, she is on a personal mission to save her home. 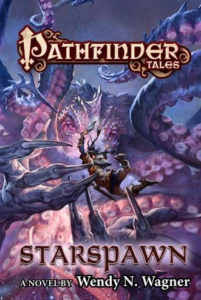 This inversion of the typical fantasy hero also applies to her history. Instead of a male hero who rescues a helpless princess, this is a female hero who deals with a blended family that even has a pet dog. Her husband is a sea captain who bravely goes on her adventures but also bravely disagrees with some of her parenting. Given Jendara’s deadly blade and angry axe work this may be more daring than standing up to a supernatural creature.

Jendarra and her ship’s crew also end dealing with the creatures that worship this cosmic being. This entails trying to deal with how the alignment of stars make this deep space creature awaken.

Don’t be afraid to pick up a copy of Starspawn from Amazon.

Paizo’s Pathfinder game uses these books to add depth to their campaign setting. By anchoring characters to different countries it fleshes out the basic skeleton of the game’s sourcebooks. Pathfinder also puts some information on their website so those who play the game can integrate the author’s story in their regular role-playing game.

I really like how the book has detailed maps and an even more detailed glossary that explains both the novel and the campaign. The campaign world of Pathfinder is complex; the novel makes this world more understandable and more human.

Hugo Award winner Wendy N. Wagner, the author, thanks her husband for his support and H.P. Lovecraft for his mythos in the acknowledgements. She also thanks her editor James Sutter for letting her purse use of this horror element in her fantasy novel.

This book makes for an effective mixture of horror with sword and sorcery. The elements of one reinforce the other well. Instead of demons or devils this warrior woman faces something that is so alien it defies definition and so large it lies outside of perception. Blending two old pulp magazine genres makes for a good story. Fans of either genre should give it a try.