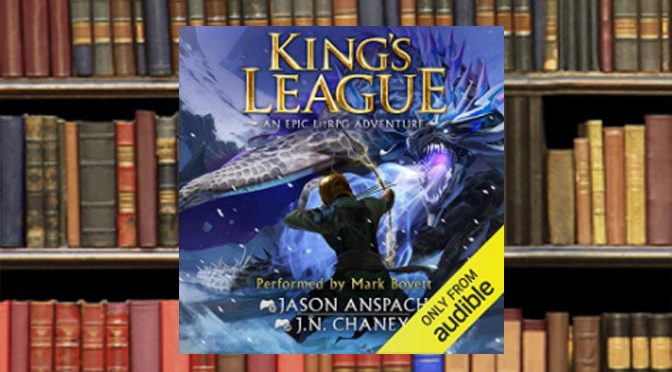 Hey all I’m back with another book from Audible. It’s King’s League, Book 01 of the King’s League series, by Jason Anspach, JN Chaney!

Plot: The plot is okay, but it’s been done so many times that I’m kind of growing sick of the “poor gamer plays some online game to make ends meet” plot device. The game our main character Dirk plays is some weird mutant cross between an Elder Scrolls game and some hardcore permadeath MMORPG, it’s an interesting combination in theory but I just wasn’t drawn into the world all that well. Honestly, the whole idea that you could make a living off a game where you “Pay to Win” and “Real Life Money to Virtual” that includes permadeath is sort of insane.

There’s no way the things that happen in the book would ever occur in a real game. You wouldn’t see some jackass decide to level an entire village including NPCs just to make some easy experience gains when he could get roasted by someone else minutes later. The balance to allow real world transactions for virtual currency wouldn’t allow for such chaos. 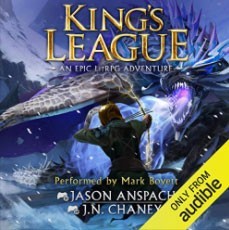 So while the basic premise of King’s League is somewhat interesting, I can’t help but feel that the authors were trying to cash in on the LitRPG genre and have never really played games before to the extent that they can imagine a story without such glaring flaws.

Characters: Dirk is a mediocre main character, mainly because for the first couple hours it’s very clear that he lets life just run him over without putting up any effort to make it better. Best friend that gets you expelled from college and you still hang out with him, much less trust him implicitly not to screw you over? Typical bully that clearly has a hate on for you, but you don’t bother to find some sort of recording device to capture his verbal abuse to prove to people he is at fault? Check. I can go on and on with faults for Dirk. The rest of the cast is little better, honestly I didn’t like any of them.

Voicework: Mark Boyett does an amazing job of bringing the characters to life, it’s just a pity that the story and characters can’t match his level of quality.

Overall: A very skippable novel, there are better LitRPGs out there.

For those who like: LitRPGs, GameLit, Gaming, Great Voicework.

Not for those who don’t like: Any of the above, or Boring Plot and Cast of Characters.