As a tie-in to celebrate the fiftieth anniversary of Star Trek: The Original Series, Simon and Schuster released a new trilogy by three different authors. The second book, Best Defense, is by David Mack, a veteran Star Trek writer, who continues the story started by Greg Cox in Captain to Captain.

The story in the second book gets more complicated as Kirk and the Enterprise go after the Transfer Key stolen by a member of the Romulan Tal Shiar who had infiltrated the Enterprise as Kirk’s yeoman. The Transfer Key is a dangerous piece of alien technology from another universe that had been hidden on board the Enterprise by all of its captains and first officers since the days of Captain April. 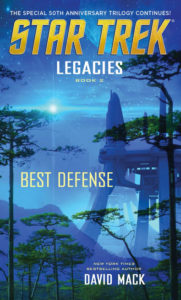 To complicate matters, the Enterprise is called to a complex peace conference between the Klingons and the Federation. Spock’s father Sarek is conducting the negotiations for the Federation and calls for the Enterprise when a Klingon battle cruiser shows up. Negotiations are going poorly, and to complicate matters, a cloaked Romulan ship is using the Transfer Key to pull away members of the Klingon delegation and drop them into another universe in an attempt to make sure there is no peace between the Klingons and the Federation.

The city where the negotiations are taking place is New Athens, where Dr. McCoy’s estranged daughter is in nursing school. As the plot unfolds, not only is the Enterprise in danger, but so are the lives of loved ones on the planet, as well as the military security of both the Federation and the Klingon Empire.

[amazon asin=1476753105&text=Join the crew of the Enterprise and pick up a copy of Best Defense from Amazon!]

I don’t want to give away any more of the plot, but the book is written in multiple points of view, so the reader knows what’s happening with all the groups involved. It’s well done and easy to follow and makes the action all the more tense as you skip from group to group. I really enjoyed Greg Cox’s first book in this trilogy and I was worried about how the story would be continued by another author, but David Mack does a masterful job with the second book and weaving together all it’s various plotlines which cover two crews, two universes, as well as various individuals.

It’s a lot of balls to juggle and Mack manages to keep them all in the air without the reader getting lost in the confusion. I’m very excited to read the conclusion of the series and I hope Dayton Ward and Kevin Dilmore can conclude it with the same skill that the previous two authors have shown.

Have you read the Legacies trilogy? Let us know what you think in the comments below.