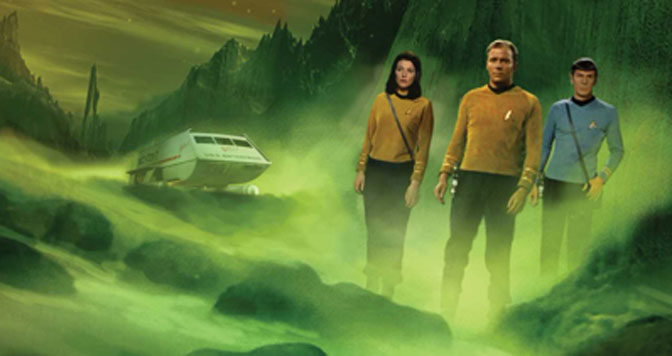 As a tie-in to celebrate the fiftieth anniversary of Star Trek: The Original Series, Simon and Schuster released a new trilogy by three different authors. The first book, Captain to Captain, is by Greg Cox, a veteran Star Trek writer, who does a masterful job of introducing us to a complex plot involving multiple captains over many decades and more than one universe.

The book opens with a visit from Captain Una, once first officer aboard the Enterprise under Captain April. Una’s arrival is supposed to be part of a nostalgic tour before she makes admiral and is assigned a desk job. Spock served with Una under Captain Pike and has the highest regard for her as an officer. No one is more surprised than Spock when Una breaks into Captain Kirk’s quarters and steals a piece of alien technology that has been hidden aboard the Enterprise since Captain April’s command. 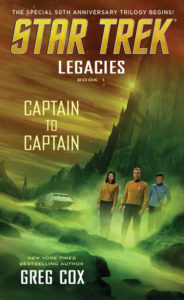 The alien “key” has been entrusted from captain to captain since April served. No one but the captains and their first officers have been told about it and all have agreed to keep it secret from Starfleet. So when Una steals it and flies off in her own ship, Captain Kirk pursues her into territory under dispute between the Federation and the Klingon Empire.

[amazon asin=150112529X&text=Discover the secret of the key with a copy of Captain to Captain from Amazon.]

Cox raises a lot of interesting issues in this book and tests the limits of the Prime Directive and draws an interesting line between what one is morally bound to do as opposed to what one’s duty is. The fact that all three captains of the Enterprise NCC-1701 chose to keep the key hidden from Starfleet is an intriguing idea on its own. How and why they chose to do that makes for a really good read.

The new species introduced in this book are polar opposites of each other. One is a highly advanced gastropod, while the other is a primitive hominid. The clash between these two species and their disputed world make up much of the setting for the story and illustrates the complexities of trying to implement the Prime Directive in a complex multi-verse.

Long time fans will find much to love in Captain to Captain. There is a thought-provoking story coupled with plenty of action and adventure set in a fascinating alien world. I have high hopes for the rest of the trilogy although I confess to be a little put off by the multiple authors. I hope the other two handle the rest of the story as well as Greg Cox handled the beginning.

Check it out for yourself and let me know what you think in the comments below.